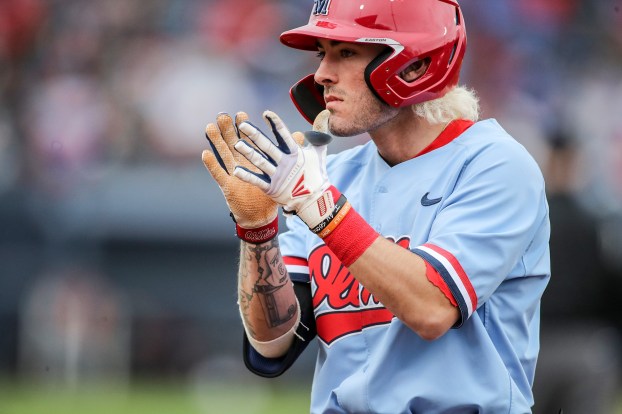 Ole Miss rolls over No. 1 Louisville on Sunday to take the opening series

While many across the SEC opened their season against lesser competition, Ole Miss welcomed the No. 1 team in the nation to town. They came from behind not just on Sunday, but in the series, to take the opening weekend two games to one against the top-ranked Louisville Cardinals.

A monster seventh inning allowed Ole Miss to come from behind on Sunday, beating No. 1 Louisville 7-6 and thus winning back-to-back games and taking the opening series from the nation’s No. 1 team. Louisville struck first, second and third. But Ole Miss did the real damage late when it mattered most.

“I don’t think anybody really knows who we are yet, Including us. But this was a great start,” said head coach Mike Bianco. “What a great three games, especially the last two. Besides the wins, to watch guys perform, young guys on the mound and young guys at the plate, to watch them perform in this type of environment in front of a really good team, just proud of them.”

The first Cardinal run came in the most bizarre fashion. After a walk and a double, the Cardinals had men on second and third with just one out. Derek Diamond got the Louisville four-hole hitter to fly out to right for the second out, however the Louisville runner on second base had errantly advanced towards third.

Thus, the Louisville runner on third had to take off towards home, chased by Anthony Servideo. What should have been a simple third out resulted in a pickle in which Ole Miss catcher Hayden Dunhurst dropped the ball allowing in a Cardinal run, the first of the game.

The blunder notwithstanding, which was credited an error to Dunhurst, Diamond cruised through four innings of play in his first ever start in a Rebel uniform. After allowing the walk and double in the first inning, Diamond downed the second, third and fourth innings in just three batters each.

“A lot of questions about Derek were answered today. That’s the guy we saw all fall,” Bianco said. “He’s a great competitor and I’m proud of him.”

One inning later, this time with Louisville leading 4-2, Ole Miss got their return on the weird run from the first inning. Saturday’s hero, Cael Baker, struck out swinging but reached base due to a dropped third strike. The dropped strike, which got past the Cardinal catcher, was airmailed over the head of the first baseman, scoring Tyler Keenan to cut the score to 4-3.

Then came the seventh. Before a single out was recorded by Louisville in the seventh inning, four separate Ole Miss baserunners crossed home plate. The inning, characterized by a handful of base hits and walks, saw the team bat around, yet only those first four runs would score. Regardless, The Rebels took a 7-4 lead into the eighth inning. Ole Miss would threaten again in the eighth, but would not score.

Wes Burton, replacing Diamond in the sixth, pitched a masterful 2.1 innings of relief. Burton retired seven straight Louisville batters in relief, before allowing the first batter of the ninth on base.

That leadoff in the ninth gave Louisville a chance late. Burton’s baserunner would score on a double in the ninth, shrinking the lead to two runs. Then, Servideo missed high and wide on a tough play at shortstop, the overthrow to first resulting in a Rebel error and another Cardinal score. Max Cioffi, in relief, picked up the save with a strikeout to end the game followed by a Hayden Dunhurst throw from his knees to get the baserunner stealing second to close the door for Ole Miss at 7-6.

“This weekend means a lot. We came out and played some of our best baseball,” Servideo said. “We still have to work on a few things, but we weren’t worried about (rankings). We just came out here and played our game, came out on top.”

The win gives Ole Miss five straight home series wins against the nation’s No. 1 team, doing so for the first time since 2015 against Florida. They’ll play again on Tuesday against Arkansas State.

Long ball, newcomers lead Ole Miss as they tie series with No. 1 Louisville

Head man Mike Bianco is quick to emphasize the returning talent on in the Rebel lineup. But on Saturday, playing... read more