Clinton comes back to top Oxford, ending Charger playoff run in first round 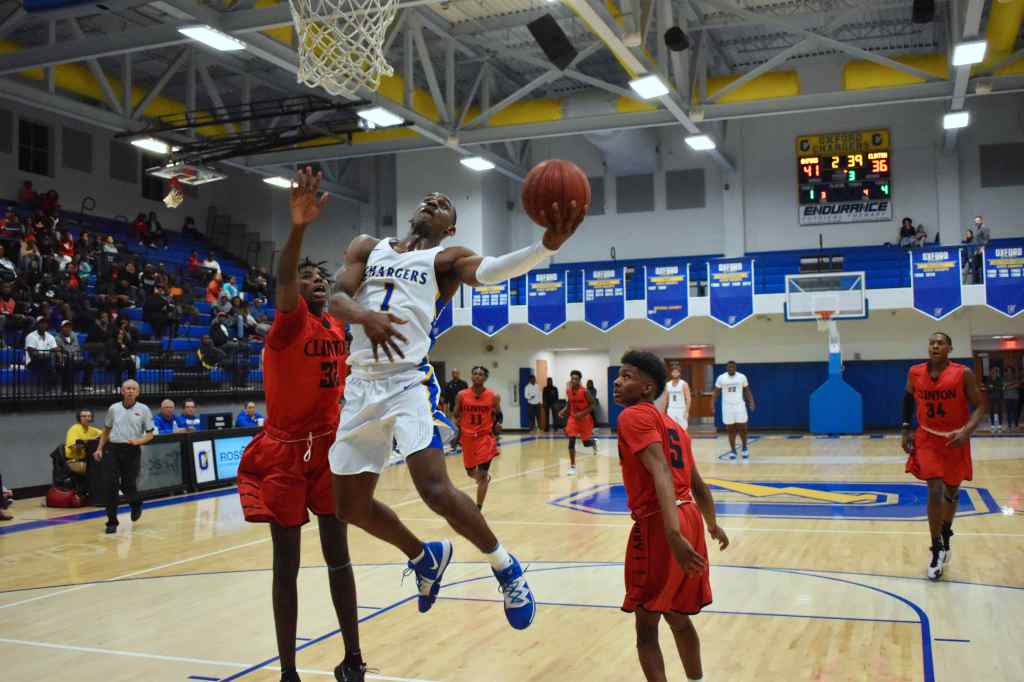 Kyland Blackmon makes a layup through contact in Oxford's playoff loss to Clinton on January 18, 2020 (Photo by Nathanael Gabler)

The playoff opener came right down to the wire at Oxford High School.

Never obtaining a lead in the game until the fourth quarter, Clinton slowly crawled back. Taking the lead late, the Arrows made just enough plays down the stretch in the fourth quarter to overtake Oxford, winning 65-59 to end the Chargers’ playoff run.

“We didn’t have the stops, late in the game, for us to secure a win,” Oxford head coach Drew Tyler said. “We have the ability to score with anyone. But when we don’t buckle down and play good, smart defense late in the game, it’s hard to protect a lead against a playoff team like Clinton.”

Oxford ran and ran early on the Arrows. Kylan Blackmon opened the game with back-to-back three pointers to set the rhythm, but mostly the opening half was played in front of the rim for Oxford. Building up an early lead behind the play of Blackmon and fellow senior JJ Pegues, the Chargers lead Clinton 17-12 after one quarter, eventually building up a 27-15 lead.

But Oxford got sloppy before half, allowing Clinton to come back. Head coach Drew Tyler had stretches where he just sat down – no one on the team would listen. As the ball stopped moving offensively, Clinton went on a 10-2 run to end the half. Where the Chargers held a twelve-point lead with just minutes left in the half, at halftime their lead was cut to 29-25.

“We let them get a lot of momentum towards the goal at the end of the half,” Tyler said. “It seemed like every third trip we drew a charge. It’s just the other 66-percent of the time, they were scoring. We couldn’t cut off driving lanes and get stops.”

That late surge in the first half turned the tables on the entire game.

Throughout the remainder of the second half, sloppy Oxford play let Clinton slowly and slowly creep back into the game. A three-pointer with 1:20 remaining in the third quarter cut the Charger lead to 45-43. Yet, Oxford still led after three.

Clinton took their first lead with 5:51 remaining in the game, laying the ball in off an Oxford turnover to take a 52-51 lead. Later in the fourth, this time trailing by three, Byron Pearson kicked the ball out to Tykel Owens who swung the ball to a wide-open Blackmon. Stepping into the shot, Blackmon drained a three with 2:28 to play to tie the game at 59. The Chargers would not score again.

After a third consecutive offensive rebound, Clinton sophomore Kimani Hamilton cleared house, isolated and took it to the house. Hamilton’s bucket put the Arrows up 61-59 with 40-seconds to play. Four free throws later and Clinton had pulled off the come-from-behind win, topping Oxford 65-59.

“We just couldn’t buckle down and get the needed stops,” Tyler said. “We lost (Hamilton). In transition, we lost him. Then he steps out on the perimeter and he can shoot the three. So he stretches our defense and exploited our feet.”

Hamilton finished the game with 24 points, including the pair of icing free throws late. Blackmon totaled 33 points for Oxford.

With the win, Clinton advances to the second round, a road meeting with Starkville. Oxford’s season ends at 22-9 in the first round of the MHSAA 6A Playoffs.