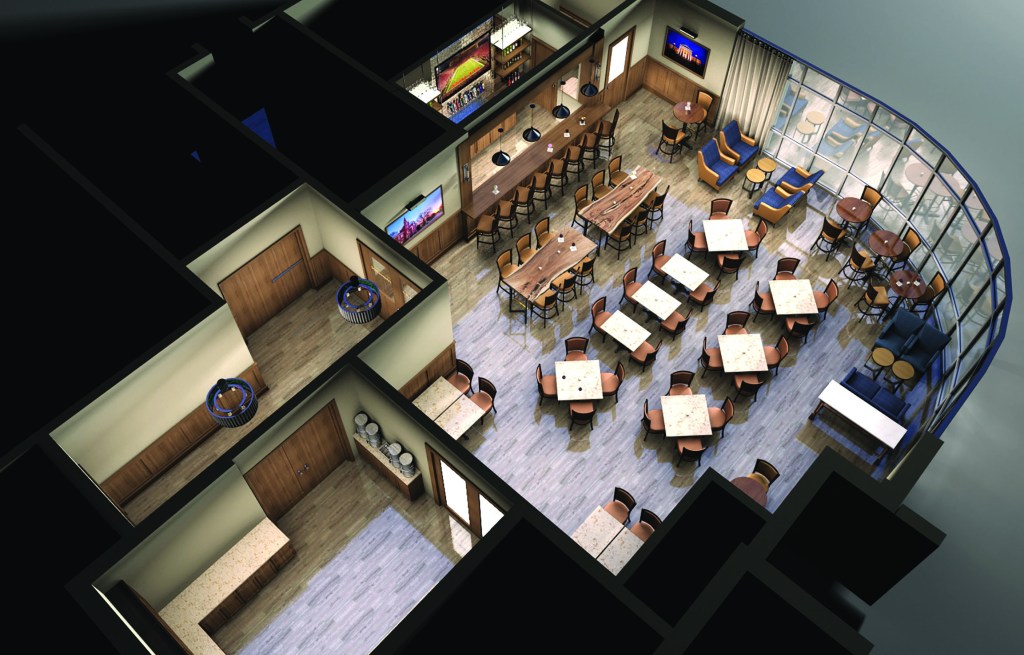 The interior of McCormick’s Bar and Restaurant at the Inn at Ole Miss will feature a bar hand-crafted by HGTV star Ben Napier. (photo contributed)

The Ole Miss Alumni Association announced in December that the Inn at Ole Miss would be receiving a brand-new restaurant and bar in a familiar space, and it is anticipated to open this spring.

McCormick’s, a new restaurant and bar, is coming to the on-campus hotel and turning what is now a breakfast-only area by the same name into a new nightlife destination. Located on the east side of the hotel’s tower, the 2,000 square-foot space is getting completely renovated and once completed, should be unrecognizable compared to what the space looks like currently.

“I think this idea had been going around for quite a while,” said Kirk Purdom, executive director of the Ole Miss Alumni Association. “We started talking about McCormick’s probably about a year and a half ago. We got some initial drawings of what we could potentially do with that facility… just to be like a regular hotel in town.”

Getting to the construction and renovation stage has taken longer than anticipated, with Purdom wanting the project to have been completed by football season last fall. With the project taking place inside a University-run building, there were steps that had to be taken according to the process the University uses for any other construction projects on its campus.

After being granted resort status in 2018, the Inn applied for its liquor license in the summer of 2019, which would allow it to serve any kind of alcohol on its premises. With the necessary paperwork, approval and paperwork attained to offer the bar aspect of the project, the planning phase began, including the process of bidding out the project.

Construction begins this week and is anticipated to be completed sometime mid-May, around graduation weekend. The space will be in the hands of Ole Miss alumni throughout, with Memphis-based Walker Brothers Construction handling the project. Ryan Walker graduated from Ole Miss, as did the person tasked with building the bar.

Ben Napier, co-star of the HGTV show “Home Town” along with his wife Erin, has been hired to construct the bar. The Ole Miss graduate will begin working on the bar next month, with its installation planned to be the last piece of the project.

Purdom got in touch with Napier roughly seven or eight months ago about possibly constructing the bar for them, and said Napier was receptive to the idea.

“I was a little bit nervous in the fall, because I thought this project may move a little bit quicker, because they’re filming right now,” Purdom said. “He can’t really get it done until March, so it’s really worked out well with some of the delays that we’ve had.”

Attempts to contact Napier were unsuccessful as of publication time.

McCormick’s menu will be simple, with appetizers, burgers and sandwiches expected to be featured. Breakfast will continue to be offered to guests in a newly renovated space.

During the week, McCormick’s will open in the afternoon around 4 p.m. and close at 10 p.m., as most other hotel bars in Oxford close at that time as well. On the weekends, the space will be open all day. While the restaurant and bar are located on a college campus, Purdom said he does not expect it to become a regular hangout for students. Students’ identification will be checked upon entering the space, he said.

With the new bar not opening until the end of spring semester, Purdom said he is looking forward to seeing how it is received during the summer, with parents in town for orientations and possibly for a regional weekend crowd, if the Ole Miss baseball team has a successful season.

“We’re not going to turn away students. Of course, if they’re going to drink they’re going to have to be 21,” Purdom said. “If they want to come here and have an appetizer or something, then they’re more than welcome to. It’s not going to be a place that I think students are going to want to (linger long). … One of the biggest questions we get from parents is, because they have orientation at the beginning of the week and at the end of the week, is, ‘Do y’all have a bar?’ We get more questions in June about (if we have a bar) than we do any other time of the year.”

The entire project, which was funded privately, costs roughly $500,000. The outdoor space, which will feature seating and a fireplace, will come after the bar and restaurant space is completed and open.

Chancellor Boyce: “We are committed to working with” IHL…