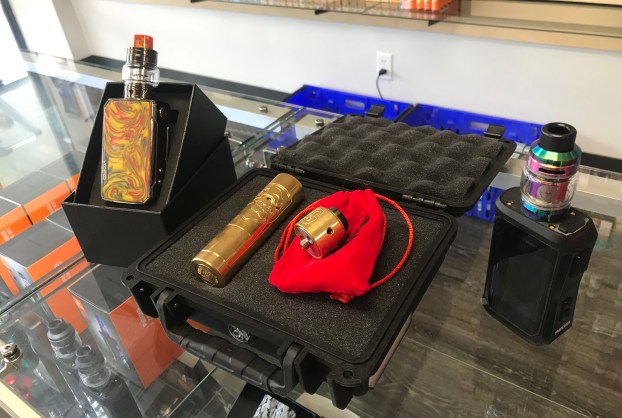 The Oxford Board of Aldermen voted to add an amendment to the smoking ban ordinance prohibiting anyone under the age of 21 to possess, sell or distribute electronic smoking devices and related materials. (Jake Thompson/Oxford Eagle)

An amendment to include electronic smoking devices and materials to the City of Oxford’s smoking ban ordinance will take effect immediately.

The Board of Aldermen approved the proposed amendment, which bans the sale and distribution of electronic smoking devices and materials to anyone under the age of 21. The amendment was unanimously approved during Tuesday’s meeting. The aldermen voted for it to take immediate effect, citing a health danger to the community, skipping the normal 30-day waiting period.

“With the issues we’ve had at both high schools, I think we have a health problem,” Ward I alderman Rick Addy said.

Addy made the motion to approve the amendment after the second reading and a public hearing took place.

The Oxford Police Department proposed the amendment during the board’s Feb. 4 meeting following incidents at both Lafayette and Oxford high schools in the weeks before. Students at each school suffered serious reactions after using a vaping device, with the most recent being two OHS students having incidents last month.

The amendment, titled Section 50-94, will put “Restrictions on Electronic Smoking Device(s) and any electronic smoking pod(s), cartridge(s), and liquid refill(s)” to anyone under the age of 21 inside Oxford city limits. It also goes toward preventing any elementary, junior high or high school students from possession electronic smoking devices or related materials on “any educational property.”

Penalties for those in violation of the proposed ordinance were included. Those who illegally possess the devices or materials will be hit with monetary fines that increase with each repeated offense. The first offense will be a fine of $25, second offense is a $75 fine and the third or subsequent offenses are a $100 fine.

A community service option is also included in the list of penalties.

Anyone, including businesses, found in violation of selling or distributing the devices or materials to individuals under 21 years of age will be hit with harsher penalties. The first offense is a $100 fine, second offense is $250 and a third or subsequent offense is a $500 fine. An enhanced fine of $1,000 could be enacted if the judge deems it necessary.

“We’re not looking at this as a way to find them, but a way to discourage the behavior,” OPD officer Rusty Rasberry said to the Board on Feb. 4. “We want to discourage this more than we’re looking to hit their pocketbook.”

During the public hearing portion of the discussion, Taylor Thompson, owner of Cloud 9 Vaping Company in Oxford, spoke to the Board before they took the vote.

“In the last two years we’ve seen many issues arise throughout the community associated with teen vaping,” Thompson said. “Whether it is a distraction in class or as horrible as a child having a seizure, there are dangerous factors at play. This is why I would encourage our law enforcement officers to put their efforts in finding the people or culprits who are not only selling to minors but also what it is they’re actually selling to them.”

Taste of Oxford set to hit milestone in 13th year

The 13th year is anticipated to be a lucky one for the St. Jude Taste of Oxford fundraising event. Oxford’s... read more