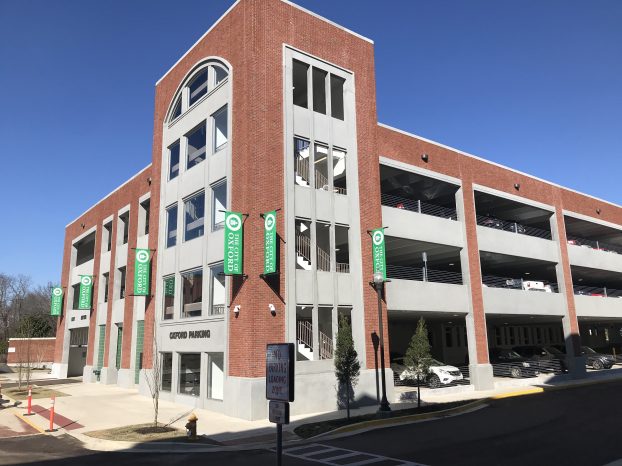 People who attend this year’s Double Decker Arts Festival and plan to use the parking garage will have to pay $20 to do so.

No changes were made to what the DPAC approved earlier this month, which included the $20 fee for all day use of the garage on Saturday, April 25. If a person chooses to leave the garage and come back, they will not have to pay again, but there is no guarantee that one of the 394 spots will be available when that person returns.

Alderman John Morgan asked if the board approved the proposal and then changes were made after, would the board have to come back and discuss those changes and seek another approval. Oxford parking director Matt Davis responded, saying he did not expect the submitted proposal would be altered after Tuesday’s approval.

“I don’t think we’ll have a huge deviation,” Davis said. “I’ve already spoken with the meter company and they can already configure this and set it up. Passport… the app that we already use now, they can set it for a special day event and just go ahead and plug that in.”

There will be an attendant on hand at the Jefferson Avenue entrance of the parking garage to assist those paying at the kiosk, which will accept cash, coins and debit/credit cards. People can also pay on the Passport app ahead of time and not have to use the kiosk.

Parking enforcement officers will be walking the garage to keep track of how many available spaces are left and will inform the entrance attendant when the garage becomes full.

Alderman Jason Bailey did express concern over how much money the city is spending on manpower and overtime in relation to how much revenue the garage could potentially make if there is not a lot of turnover.

“With 394 spaces, you’re generating about $7,500,” Bailey said. “We’re using a lot of resources. … That’s just kind of concerning that we’re not generating that much income and we’re using that many people.”

Davis did acknowledge it is about turnover, and there is the possibility people will choose to leave for lunch or other reasons, opening up spaces, or everyone who parks in the morning chooses to not leave all day, minimizing the amount of money made.

The Board also approved a request from Oxford police chief Jeff McCutchen to amend the previously approved parade permit for Double Decker. Citing safety concerns and an anticipated larger amount of trucks loading onto the main stage, OPD requested to close off the North Lamar Boulevard and Jefferson Avenue intersection, which the Board approved.

Barricades will be placed on the east and west side of the intersection as well as one on North Lamar to keep traffic from flowing towards the stage area. Traffic heading west on Jefferson will be diverted up North 14th street, west on Adams Avenue to North Lamar, then back on West Adams Avenue and south on North 11th Street, where they will empty back onto Jefferson at the parking garage entrance.

Traffic heading east on Jefferson will be diverted the same path, but in reverse order.

The Board also held a first reading to consider amending the parking ordinance, removing the three-hour time limit for parking in the Downtown Square area on Ole Miss football home game days.

Oxford will soon be able to get a jump start on their sewer and water rehabilitation project. During Tuesday’s Board... read more