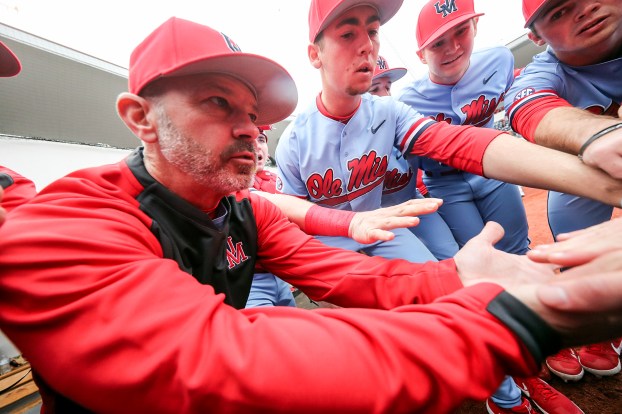 Bases loaded is back! Every Friday (and the rare Thursday), we’ll take a look at four pressing storylines heading into the weekend of Ole Miss baseball. This week, the 3-1 Rebels are preparing for a brisk weekend with visiting Xavier.

Ole Miss could hardly have scripted a better opening weekend. Taking two of three games from the No. 1 Louisville Cardinals a week ago, Ole Miss got a bit of a test during the midweek, needing extra innings to get past Alcorn State on Wednesday.

Regardless, the Rebels have moved up from No. 25 to No. 17 in the D1Baseball poll, and another series win over Xavier could boost them up yet again. Here’s four things to keep an eye on as the Musketeers travel to Oxford:

First Base: How hot can Anthony Servideo get?

One year ago, Ole Miss outfielder Ryan Olenek went into the start of Southeastern Conference play batting .439 with an on-base percentage of .530 during non-conference play. It seems like junior shortstop Anthony Servideo is gunning to top those numbers this season.

Through the team’s first four games, Servideo is batting .533 with an on-base percentage of .650. Sure, the sample size of four games and 15 at-bats is minuscule in baseball terms, but these numbers haven’t come against poor competition. Against the No. 1 Cardinals, Servideo got five hits, including a home run. On Wednesday against Alcorn State, Servideo was the hero in the 10th inning, hitting his first ever walk-off homer.

In his two years as a Rebel going into this season, the shortstop hit just four total home runs. He now has two in four games.

“We’re always on him about gaining weight,” head coach Mike Bianco said. “He’s got good bat speed, and he’s not a big guy, but he’s swinging with more freedom. He’s not locked up in there. Last year, I think he felt like that was his role, the table setter. And that still is his role, batting leadoff. But he also can run it out of the yard and get you an RBI.”

Tonight’s savior: the dude with the hair pic.twitter.com/ldqHAcHjcP

It’s unrealistic to expect Servideo to keep hitting at a clip north of .500, but watching how long the junior’s hot streak can continue will be fun.

Second Base: How deep is the Ole Miss bullpen?

If there’s an area that lacks some depth on the Rebel roster, it’s likely in the bullpen. Ole Miss, with starter Greer Holston failing to record an out on Wednesday, needed to use five different bullpen pitchers against Alcorn State. Those five, including Bianco’s go-to guys in Taylor Broadway and Austin Miller, will likely not be able to see action until this Saturday, putting into question the depth of the Rebel pen.

And it’s not like the bullpen has been all that great either. Four of the eight runs allowed to Alcorn State came from the bullpen. In two wins against Louisville on Saturday and Sunday, the Cardinals scored three runs in the ninth inning to put a scare into the team.

“It’s easy to be super critical of the bullpen, just because we’ve had leads late and haven’t been able to finish the game,” Bianco said on Wednesday. “I’m confident that we’ll have enough pieces there; we just have to figure it out.”

Braden Forsyth, a 6-foot-3 sophomore, has been one player who’s stood out and made a name for himself. Forsyth got the save in Saturday’s win over Louisville before coming in and pitching two innings against Alcorn State, getting the win.

Third Base: What will this Rebel rotation look like against a school not ranked among the nation’s best?

All three Rebel starting pitchers from the weekend would probably say they didn’t have their best foot forward against Louisville. None of the three were terrible (the worst outing being Doug Nikhazy’s 5.1 innings pitched allowing four runs), but none were electric (both Gunnar Hoglund and Derek Diamond also allowed three runs each).

This said, for each it was their first start of the season and they were making that start against a team that made it to the final four in Omaha one season ago. In a typical season, players get some games to hone their skills before heading into SEC play. These guys had to start their year against a team that ranks equal with anyone in the SEC. This weekend against Xavier should show more of what fans can expect from pitchers, specifically Nikhazy and Hoglund, on the mound.

At Bat: Will Hayden Dunhurst find his swing at the plate?

Freshman catcher Hayden Dunhurst was in rarified air when he made last Friday’s start behind the plate. Before Dunhurst, Bianco had only ever started two true freshmen at catcher; there’s now a third.

Over the weekend against Louisville, there were flashes of why Bianco had faith in Dunhurst to start just months removed from high school. Defensively, he’s incredible, throwing out a handful of runners over the weekend, including the series-ending out in which he threw out a Louisville baserunner from his knees by a country mile.

The catcher caught a runner stealing to beat the No. 2 team in the country.

EVERYONE in the infield lost it ? (via @olemissbsb, @secnetwork) pic.twitter.com/yoXiRcgLMv

At this point, the freshman has yet to show that he can hit. Yes, his opening weekend behind the plate were against a pair of preseason All-Americans. Regardless, he went 0 for 11 on the weekend against Louisville and another 0 for 1 on Wednesday pinch hitting. For the freshman to make his defense count, he’s going to have to get in more of a rhythm swinging the bat.

The Regents School of Oxford’s girls basketball team is heading to their first-ever state semifinals game. On Wednesday night, the... read more