Lafayette survives and advances in second round win over Callaway 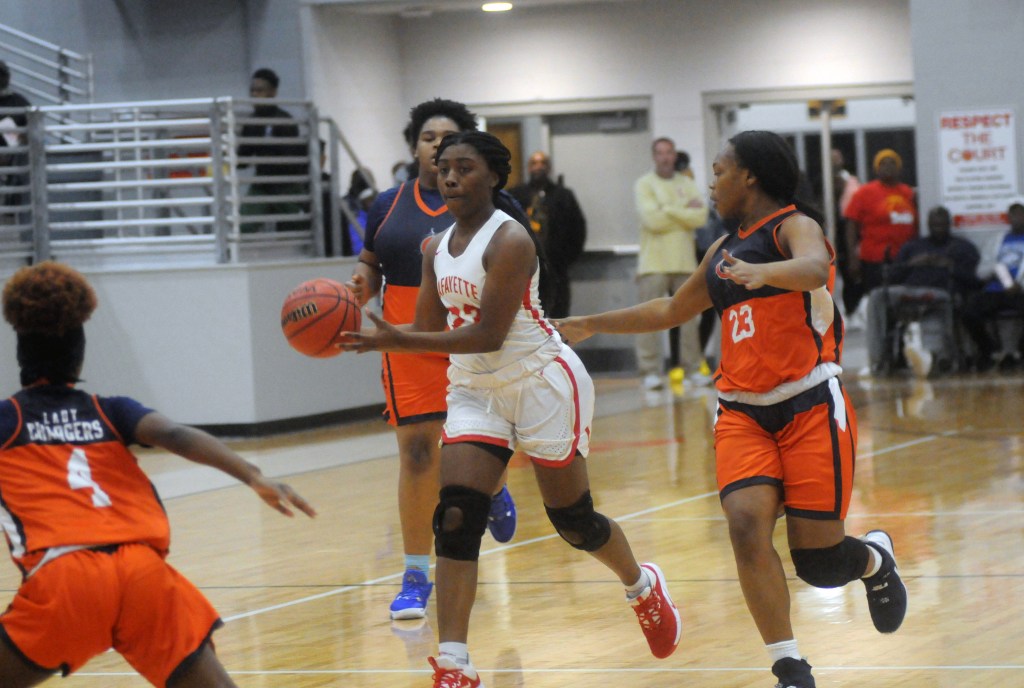 Lafayette's Azariah Buford (23) dribbles up court against Callaway's Tanasia Jackson (23) and Armonie Williams (4) during their second round game of the Class 5A playoffs at Lafayette High School on Friday, February 21, 2020. The Lady Commodores won 58-46. (Jake Thompson/Oxford Eagle)

The journey to The Pavilion officially began for Lafayette’s girls basketball team on Friday, and what started as a walk in the park quickly turned into a struggle.

After taking a 30-point lead over Callaway, the Lady Commodores had to withstand a late rally by the Lady Falcons in their 58-46 victory inside the Lafayette High School gym.

The win sent Lafayette to the quarterfinal round of the Class 5A playoffs.

“Callaway kept playing and we kind of get a little complacent, I felt like,” said Lafayette head coach Shayne Linzy. “Callaway started making some shots and we were missing layups, things of that nature. But, we won and like I told the kids it’s survive and move forward. We really can’t worry about this game anymore because we’re not going to play Callaway again. Now we’re just going to worry about next week.”

The start of the second round contest had the makings of a runaway win for Lafayette (21-5) when they jumped out to a 25-point lead at halftime.

It was a dominant effort by Lafayette in the first half, similar to how they started their game on Feb. 14 against Saltillo during the Region 1-5A tournament championship.

Midway through the third quarter the Lady Commodores took a 30-point lead over Callaway (12-13), which is when the game shifted in tone. The Lady Falcons kept pushing and kept cutting into Lafayette’s lead, making the final minutes of the game a little more stressful than Linzy would have preferred it.

“I thought the start of the game, I thought the girls came out and we really got after it hard,” Linzy said. “I think getting the lead that we got really put Callaway in a bind and fortunate enough for us, we did get that big enough lead that when they did make their comeback, we were able to sustain it somewhat and come out with the win.”

The senior trio of Azariah Buford, Kimaya Dixon and Molly Jones was once again the engine of the Lafayette offense, combining for 45 points. Dixon led all scorers with a game-high 20 points while Jones scored 14 and Buford added 11.

For the second straight game the Lady Commodores will have at least six days off between contests. The quarterfinal round is not scheduled until next Saturday, giving them seven days of rest. Linzy said he plans to go about the week the same as he did leading up to Friday’s game.

The rest will be welcomed because beginning in the quarterfinal round, whichever two Class 5A teams make it to the championship game at Ole Miss on March 6 will play three games in a six-day stretch.

“I told the kids if we win we get a week off. Now, we’re going to practice but we get a week off until we have to play,” Linzy said. “We’re the type of team, because of how small we are, we need time to heal up.”

Lafayette will play Columbus at Itawamba Community College on Feb. 29 at 4 p.m. with the winner advancing to the semifinals on March 3 at the Mississippi Coliseum in Jackson.