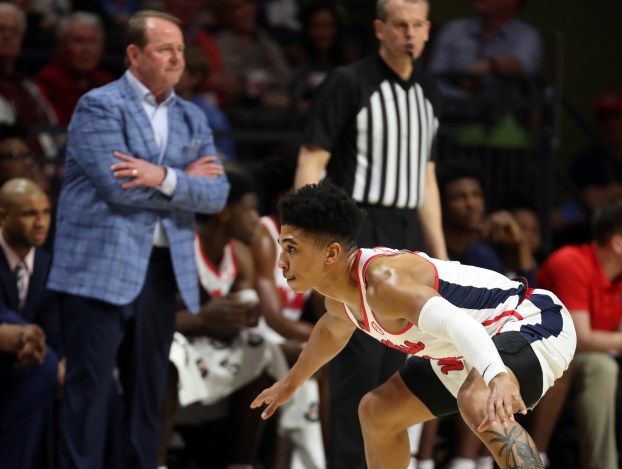 Ole Miss Basketball vs Alabama on February 22nd, 2020 at The Pavilion at Ole Miss. Twitter and Instagram: @OleMissPix Buy Photos at RebelWallArt.com

Head coach Kermit Davis was not on the Ole Miss sideline for the final fifteen minutes of play on Saturday night. Tossed after getting his second technical foul, Davis’ absence was a microcosm of everything that went wrong for the Rebels against Alabama.

Issues for the Rebels mounted early. For the entirety of the opening 20 minutes of play, it seemed like Ole Miss could not get a single stop defensively. Alabama shot 55-percent from the field over the opening half of play, hitting six three pointers in the process of racking up 45 points in the first half alone. But the issues came beyond what the team could really control.

As for Davis and the SEC officiating crew, problems began early. For moments, in the first half, play was so choppy due to strange foul calls it bordered on difficult to watch. Multiple times in the opening half, Davis’ face came within manager-to-umpire distance with the officiating crew before backing off. It’s nearly a miracle he made it until the 4:05 mark in the first half before receiving his first technical foul.

With 14:31 to play, now in the second half, it was Rebel senior Breein Tyree taking up his issue with the referees, resulting in Tyree drawing a technical foul. Davis had seen enough. Stepping in to defend his lone senior and leading scorer, Davis had more words with the officiating crew, eventually resulting in his second technical of the night and subsequent ejection from the game.

The defense still couldn’t manage to string together enough stops in the second half to even keep it close. A three from Devontae Shuler and subsequent steal and slam from Dude Collum cut the Crimson Tide lead to 81-67 with 7:43 to play. It would never get closer, ending by a final score of

Hidden within an ugly Rebel loss is the injury of starting forward KJ Buffen. The 6-foot-7 sophomore left the game in the first half with a lower back injury and would not even come out of the locker room to join the team on the bench during the second half. Buffen’s presence may not have helped the Rebels tonight, but it’ll be an issue moving forward if he misses significant time.

Breein Tyree scored 28 in the game, fouling out with 8:50 to play. Devontae Shuler added 21 of his own.

With the loss, Ole Miss drops to a touch 4-10 in SEC play. All hopes at a revitalized, late push to the NCAA Tournament seem shot after an 0-2 week that also included a Tuesday loss at Missouri. Next up for the Rebels: a trip this Tuesday to No. 13 Auburn.