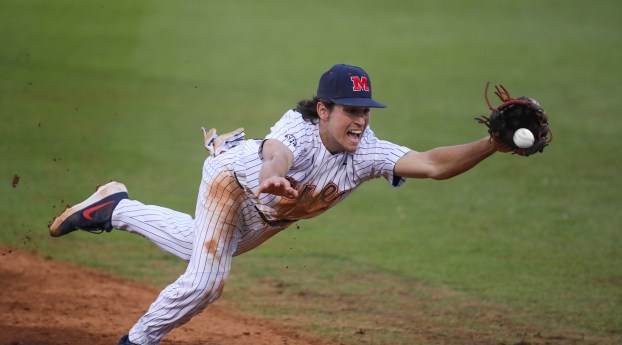 Very few outside of the Rebels’ clubhouse expected such explosive offense from up and down the lineup, but eight games in, home runs are the weapon of choice.

With the Rebels trailing by one run in the bottom of the seventh, Hayden Leatherwood delivered the crucial blow to Southern Mississippi. The junior took a fastball down the middle over the right field wall, providing the winning runs in Ole Miss’s 4-3 win over the Golden Eagles at Oxford-University Stadium on Tuesday.

Leatherwood’s second home run of the season was the Rebels’ 17th in their first eight games.

“As a child, I dreamed of playing here, and now I’m hitting a couple home runs and actually making an impact on this team,” Leatherwood said. “It’s indescribable.”

After regaining the lead, Braden Forsyth came into the game in the ninth inning and fought through some trouble. Southern Miss (6-2) got the tying run to third, but Forsyth stranded him with back-to-back strikeouts to pick up his second save of the season.

Ole Miss (7-1) got on board first, with an RBI-double by Peyton Chatagnier and an RBI-single by Tyler Keenan in the bottom half of the third inning for the 2-run lead.

Southern Miss’s runs came with a run in the fifth, sixth and seventh innings.

For the second midweek game in a row, the Rebels’ starting pitcher struggled. Wes Burton got the start, but after a smooth first inning ran into trouble in the second. He left the game after 1.2 innings of work.

Ole Miss concludes their opening homestand by winning seven straight, and will soon take their first road trip of the season. They head to Greenville, N.C. this weekend to play three games against High Point, No. 21 East Carolina and Indiana.

Rebels in the NFL Combine: Stock watch and draft watch for eligible players

The 2020 NFL Scouting Combine is underway. The scouting combine kicked off Monday from Indianapolis, with a series of interviews,... read more