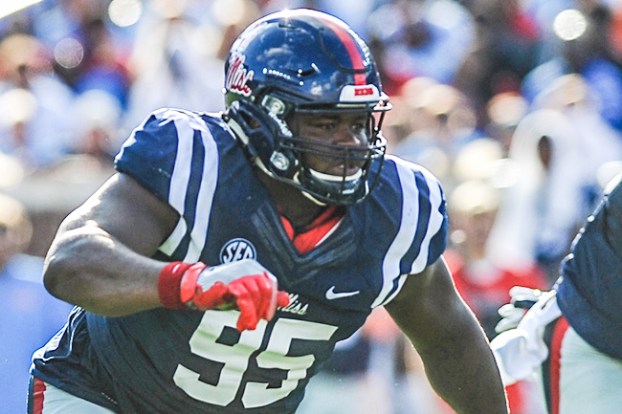 Rebels in the NFL Combine: Stock watch and draft watch for eligible players

The 2020 NFL Scouting Combine is underway.

The scouting combine kicked off Monday from Indianapolis, with a series of interviews, measurements and drills meant to assess a player’s readiness and aptitude to compete at the professional level. On Thursday, players move from events behind closed doors to drills performed on the field and televised to a national audience.

Four Ole Miss players – Josiah Coatney, Benito Jones, Scottie Phillips and Qaadir Sheppard – were invited to the 2020 combine. With approximately two months remaining before the NFL Draft, and leading into their combine workouts, let’s take a look at what the top evaluators are saying about these Rebel prospects:

Coatney started in 34 of the last 35 games for Ole Miss over three seasons, accumulating 174 total tackles and 15.5 tackles for loss. He’s played both defensive end and defensive tackle in both 3-4 and 4-3 schemes. Here’s what the evaluators say:

Lance Zierlein’s (NFL Network) analysis: Three-year starter who plays with good awareness and motor. Coatney will lose the initial phases of block engagement, but does a nice job of using his hands and athletic ability to right the ship and get back into the play. Against NFL competition, however, his lack of body control could limit his effectiveness. He lacks two-gap consistency at the point of attack and may not have the traits for upfield disruptions.

Walter Football analysis: Coatney is a big run-stuffing nose tackle who was a good run defender for the Rebels. In his sophomore (65 tackles) and junior seasons (63 tackles), Coatney was productive in defending the ground game. He had 3.5 sacks as a sophomore and one as a junior. As a senior, Coatney totaled 46 tackles with two sacks. Coatney was okay at the Senior Bowl.

Jones, a former five-star recruit out of Waynesboro, Miss., finished his Ole Miss career 9th all-time in tackles for loss (31.0) and 11th in career sacks (10.5). He’s played both a 3-4 nose tackle and a 4-3 defensive tackle for the Rebels. Here’s what the evaluators say:

Lance Zierlein’s (NFL Network) analysis: When the tape is on, it’s impossible not to notice Jones making things tough for SEC offensive linemen. He possesses average power at the point of attack, but can really be disruptive when he’s actively attacking the gaps. He may have issues with contact balance and anchor against NFL double-teams, so scheme fit might matter. He’s an even-front shade nose who can step into an early rotational role, but has the potential to become a future starter with adequate rush potential to boot.

Walter Football analysis: For the NFL, Jones could be a heavy nose tackle who contributes somewhat in the pass rush. Jones got his 2019 season off to an impressive start with a strong performance against Memphis, including an interception. On the year, he totaled 30 tackles tackles with 5.5 sacks and four passes batted. Jones then was decent at the Senior Bowl. He has some athleticism and quickness, but also has limitations from his height and lack of length.

A junior college product, Phillips started 18 games as a Rebel over his junior and senior seasons, totaling 1,470 yards and 17 touchdowns. Here’s what the evaluators say:

Lance Zierlein’s (NFL Network) analysis: Competitive runner with a compact frame who can be elusive but should not be labeled as finesse. Phillips is an instinctive runner in space who can stack moves and burst laterally to circumvent tacklers. He’s an experienced zone runner who can get to challenging cutback lanes but appears to be more comfortable as an outside runner than between the tackles. He could challenge for a spot as a RB3 but might need to prove he can handle special teams and/or third-down duties to improve his chances.

Walter Football analysis: Phillips is a short back who is very thick and strong and has some real power. He can flat out run over some tacklers with violence and shows a serious ability to pick up yards after contact. On top of his physicality, Phillips has a burst with quickness to the edge and speed to hit the hole before it closes. Phillips may not have the size to be a bell-cow back who is a true three-down starter in the NFL, but I know team sources who like him and think he could be a really good rotational back who offers a change of pace as shifty but strong back.

There’s simply not a lot out there about Sheppard. While productive at Ole Miss – he had 10 tackles for loss in 2018 playing primarily as an outside linebacker – he’s not exactly on the radar of most teams or analysts heading into the combine. A few days in front of scouts and general managers for him to impress could do him some good.

How to watch the Rebels at the Combine:

Ole Miss climbed to No. 15 in the D1Baseball polls after their three-game sweep of the visiting Xavier Musketeers over... read more