Witness to History: Once expelled, Donald Cole welcomed Oxford back with open arms 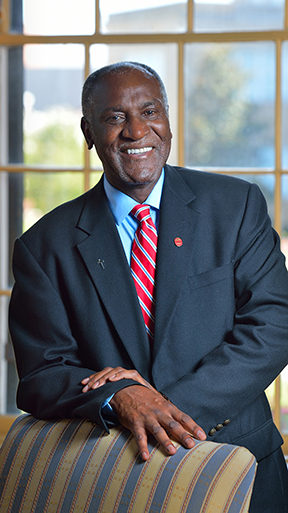 Editor’s Note: Read this story and more in the 2020 edition of PROFILE, a special publication of Oxford Newsmedia – available on newsstands today.

University of Mississippi professor emeritus Donald Cole has seen his fair share of confederate protests on the Ole Miss campus, and the events of last February sent him back in time.

He’s been involved with his fair share of protests fighting for civil rights, one of which actually led to his expulsion from the University back in 1970.

Cole arrived at the University of Mississippi in 1968, six years after James Meredith and integration at the University. What he didn’t realize, however, is how slowly integration was moving. Growing up in Jackson, Cole said he wasn’t used to being around the sort of social justice movement that was happening around the Ole Miss campus at the time. So, showing up to Oxford in the late 60s was a bit of a shock.

One of eight children growing up, Cole’s older siblings had taken place in sit-ins and other protests around Jackson when he was younger. However, they sort of sheltered young Cole from those actions, he said. That quickly changed when he arrived in Oxford.

It took Cole little time to get assimilate himself with the underrepresented African-American student population within the University at the time. Pushing for more rights for the African American and other underserved communities became just about an everyday thing.

“It was a daily routine, in terms of protesting. We would go to class, go get some work done, then we’d have some meetings,” Cole said. “We didn’t think anything we were saying was abnormal or out of context with what it should be.”

However, fate would soon intervene for Cole and his cohorts, forever cementing them in the University’s history.

“That night, we rallied as many people as possible. It was going to be a big protest and it was going to be televised and make the University change the way in which we wanted it to change. The events leading up to that were kind of mill-of-the-day events that we had been doing every day for months.”

“That night” referenced by Cole is the night that would lead to the events surrounding his expulsion. A special international group was on campus, and their standard protests had a larger audience. Their normal group of protestors was larger and more organized. The goal? To try and embarrass the University into changing their ways.

The group compiled what they called “acts for the administration.” Essentially, it was a list of actions they wanted the University to take. The list contained things such as disassociating themselves from the Rebel flag, hiring faculty members who were persons of color and recruiting black athletes (of which there were none at the time). Cole said he saw their goal as a means of pushing the University in the right direction.

“I’m sure they were getting tired of us, but I’m also sure they recognized that our strategy could possibly work,” Cole said. “Part of our strategy was embarrassing the University into a better way of operating. But certainly, that wouldn’t have been any desire on their part. I’m sure when we protested that afternoon at Fulton Chapel, they wanted it more controlled than we wanted it to be. That was an event that was particularly important for both sides because of the publicity that could’ve been generated.”

Events surrounding that individual protest would land Cole in jail for two nights. Along with seven others, Cole was expelled from the University on that day, Feb. 25, 1970.

However, Cole said he has no regrets.

All this prompts an obvious question: why come back after being expelled and disgraced back in 1970?

“I’ve asked myself that so many times, and I never could give myself a great answer to that. The most honest answer I can give is that I don’t know,” Cole said. “What idiot would leave Oxford to go anywhere else?… The opportunity to come back here, to come to Oxford, we took without hesitation. It’s kind of telling about the special part of this Oxford community and how warmly that I was received within the community.”

After a 25-year career at Ole Miss, where he served as everything from a math professor to the Assistant to the Chancellor for Multicultural Affairs, Cole retired in 2018. He’s still on campus all the time, serving as a professor emeritus. – he even still has an office in the math department.

And yes, he was in Oxford in February 2018 when a confederate rally and march brought national eyes to Oxford. It was a weird way to reminisce, he said. It was something he lived through, happening again over 40 years later. This time, however, the reaction to the protest did nothing but impress him.

“This was far from the first confederate rally I’ve seen on campus. I’ve seen my share and I have all types of thoughts about that,” Cole said. “But really, I was pleasantly surprised by the campus reaction. You don’t want to stop free speech on a college campus unless it’s going to lead to danger. But I was so proud of the reaction by the students, the faculty and the administration. The administration let free speech happen, regardless of if they agreed with it. The students who rose up and said, ‘This is my university and the hate you bring does not define us.’ Their reaction impressed me.”

The old saying goes, ‘Those who do not learn history are doomed to repeat it.’ In a way, Cole knows this chapter of Ole Miss history better than anyone. Yet, he’s had to relive it up close and personal unlike many ever will.