Oxford baseball proves they can play with anyone in the state 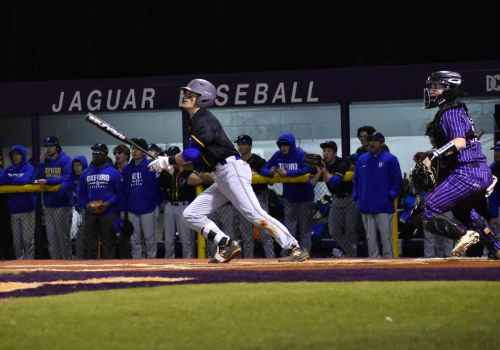 Ty Wicker puts a ball in play on the DeSoto Central Jaguars on Feb. 25, 2020 (Photo by Nathanael Gabler) 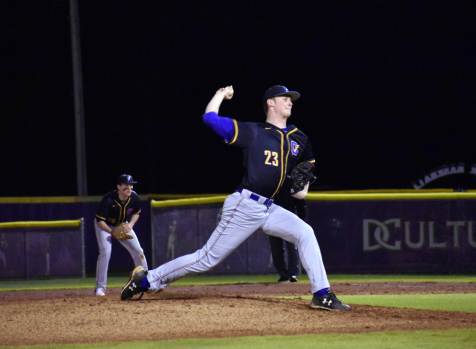 Owen Bruce threw three scoreless innings, striking out six in a loss to the DeSoto Central Jaguars on Feb. 25, 2020 (Photo by Nathanael Gabler) 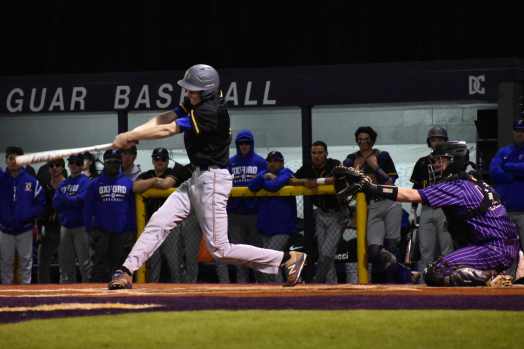 Oxford was three outs away from beating the nation’s No. 3 ranked high school baseball team on Tuesday night.

Giving up three runs in the bottom of the seventh to the DeSoto Central Jaguars on the road in a 6-5 loss, the Chargers proved definitively they can play with anyone in 6A baseball this season.

“We planted some seeds of doubt in their minds. If they have anybody up in the bottom of the seventh, other than who they had up, we win that ballgame,” head coach Chris Baughman said. “I really, really thought we grew up a lot tonight – a lot. We played tight and didn’t have really good at-bats early. But Eli (Wicker) got us going, and we relaxed a little bit at the plate. We just grew up.”

Leading off the bottom of the seventh for the Jaguars was Blaze Jordan, a Mississippi State commit and likely first-round pick in the 2020 MLB Draft. Jordan signed, leading off a three-run comeback. As Baughman said, if it’s anyone but the top of that lineup, Oxford could’ve easily walked away with the upset, largely in part due to how they pitched early in the game.

Oxford starter Owen Bruce struck out five batters through five innings, allowing five hits and two earned runs. Through the opening three innings, he allowed just one hit and no runs against a team ranked No. 3 in the nation by Perfect Game.

“It’s always fun on the mound; it doesn’t matter how well I’m pitching. But tonight was better,” Bruce said. “We’re not scared of them. We knew they lost seven guys from last year. For us, tonight was just more proof that we can beat those guys in the playoffs.”

Trailing 3-0 after four innings, Eli Wicker led off the fifth with a double. The inning, which included two Oxford hits, a hit batter and a pair of wild pitches tied the game at three. Sam Bianco led off the next inning with a double, an inning that included three more hits to put Oxford up 5-3 going into that bottom of the seventh. They nearly pulled it out, coming up just three runs shy.

There was no doubt from those on this team that they’re capable of beating the Jaguars.

“We believed from the get-go that we could beat them,” said Sam Bianco, who went 1 for 3 on the night from the plate. “Today will help get us going. Owen shoved on the mound. He’s the best number three guy in the state. That makes it easier for us.”

A year ago, Oxford went 0-3 against DeSoto Central, losing the three games by an aggregate 30-4 score. This year is much, much closer. The Chargers return to action Saturday against Jackson Prep in Tupelo.