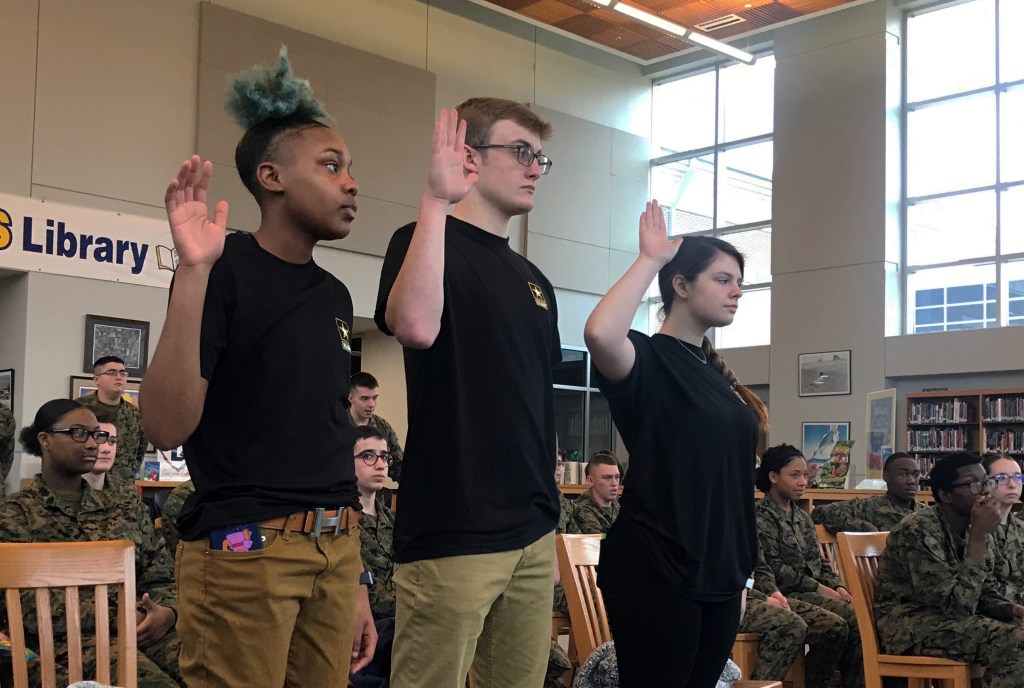 Three high school students took the first steps toward exploring where no man has gone before.

The U.S. Army, in partnership with NASA and Space Center Houston, conducted the first-ever future soldier enlistment ceremony from space on Wednesday.

The ceremony took place inside the library at Oxford High School, where three high school students from North Mississippi took the ultimate oath to serve their country by enlisting into active duty of the Army.

Randy Tarleton of Lafayette High School, along with Kaiya Arnett and Hailey Neville from Byhalia High School, took their oath of enlistment from Colonel Andrew Morgan, who was broadcasting from the International Space Station.

Over 150 locations across the country, including OHS, held future soldiers who were taking part in the ceremony.

“Today marks the first day of the rest of your lives,” Morgan said. “You will forever be changed by your decision to serve your country.”

For Tarleton, the decision to enlist was one of duty, but also a choice to continue in his family’s footsteps. He will work to become a helicopter mechanic, which is what his grandfather did while serving in the Army.

“Because he did it, that was the main reason why I wanted to (enlist),” Tarleton said.

After administering the oath, Morgan answered questions submitted by JROTC members from across the country. Oxford’s JROTC group asked Morgan what impact will the development of the Space Force have on JROTC programs moving forward.

“These kids are absolutely just amazing, and it’s just phenomenal the way that they are,” said Captain Sean Baxter, who is the senior Marine instructor at OHS. “They were here and excited to sit through this and to hear their school on TV. They’re all just so proud of their school, proud of the program.”