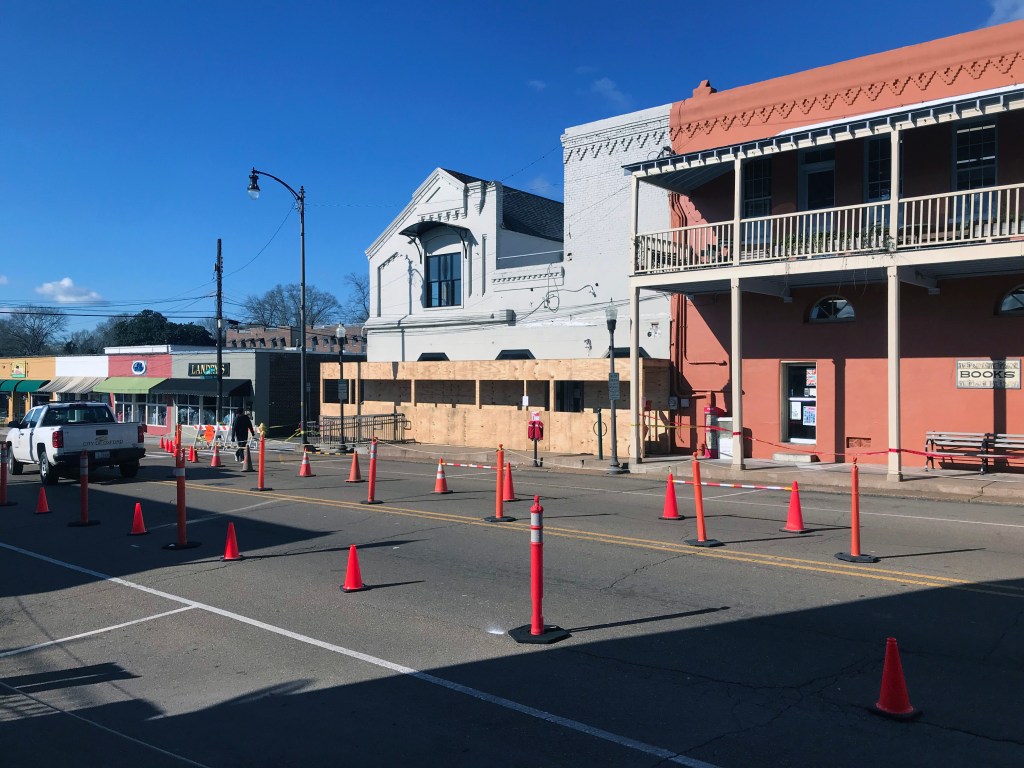 Structural concerns discovered during a renovation project at 208 South Lamar Boulevard caused the closure of the sidewalk on the west side of the street as well as lane closures. The Courthouse Square Preservation Commission will hold and emergency meeting on Friday morning to discuss the building's future. (Jake Thompson/Oxford Eagle)

Issues discovered during a renovation project at 208 South Lamar has created a concern for safety and a discussion about the building’s future.

On Wednesday, the City of Oxford announced the sidewalk on the west side of South Lamar Boulevard, as well as on-street parking in that area, would be closed, citing “structural concerns and potential hazards to pedestrians and the traveling public.”

Two-way traffic on South Lamar has been shifted east to increase the safety for passing traffic, with southbound traffic using the center of South Lamar and northbound traffic having to drive through the parking bays on the east side of the road. There is not a projected timeline for when traffic patterns will return to normal.

Chris Carter, the city’s building official, was called to the building located at 208 South Lamar by structural engineer Chad Fowler on Wednesday, according to Mayor Robyn Tannehill. Once on site, Carter discovered some structural issues inside the building.

“It is my understanding that while the contractor was installing the bracing system, an interior section of the brick that was behind plaster was exposed, revealing loose bricks,” Tannehill told the EAGLE on Thursday. “After reviewing the concerns of the structural engineer, Chris Carter determined that the building was not safe.”

Chef John Currence is currently in the middle of a renovation project to turn the building into a New Orleans-style po’boy restaurant, which will also include a rum-themed bar on the balcony. Currence has been working on his new restaurant since last summer.

“The safety of our citizens is our top concern, and certainly our first consideration in this instance,” Tannehill said.