“A SAD DAY”: 208 South Lamar to be demolished amid structural concerns 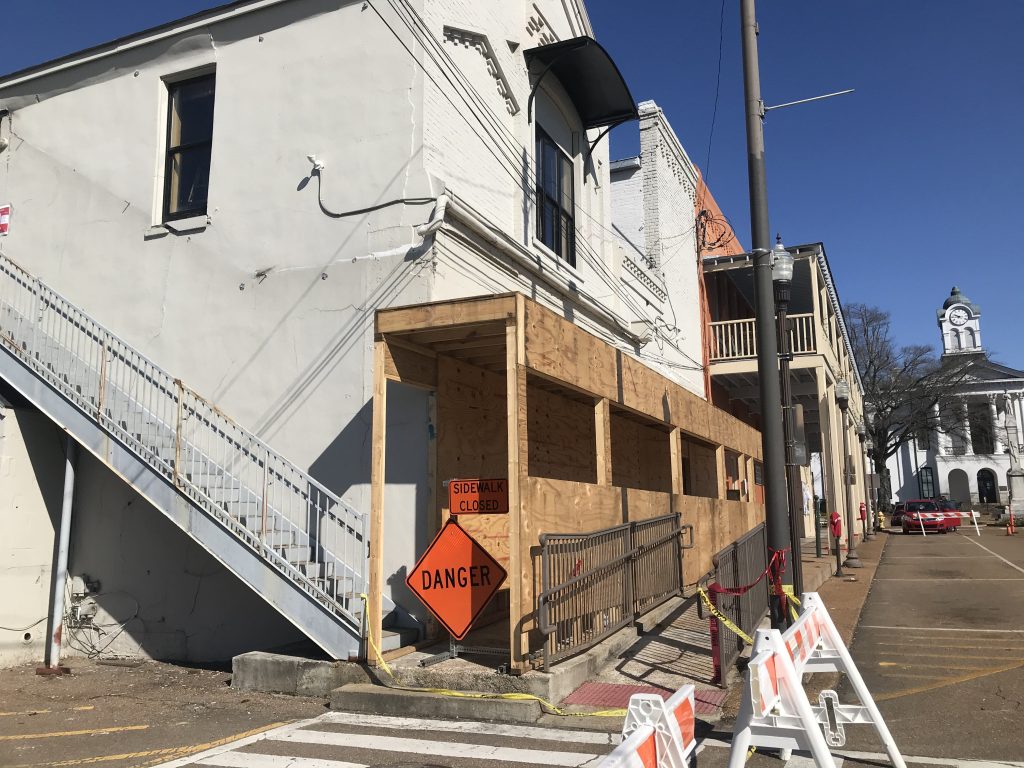 The Courthouse Historic Preservation Commission approved a request to demolish the building at 208 South Lamar on Friday, Feb. 28, 2020. Structural issues were discovered by city building officials earlier in the week, prompting the closure of the sidewalk and traffic lanes on South Lamar Boulevard. (Jake Thompson/Oxford Eagle)

It is the end of an era for one of the Downtown Square’s most notable buildings.

Amid structural and public safety concerns, the Courthouse Square Historic Preservation Commission approved a request for a Certificate of Appropriateness to demolish the building located at 208 South Lamar.

The building most notably was the home of Smitty’s restaurant, but has most recently been the home of the Mexican restaurant La Paz, Kelly English’s Second Line restaurant and Stella, prior to the current renovation project by chef John Currence to turn it into a New Orleans-style restaurant with a rum-themed bar on the second floor.

On Wednesday, the City of Oxford announced issues had been discovered inside the building, which caused the west sidewalk on South Lamar Boulevard to be closed, along with pushing traffic east on the road.

Later that day, the City Planning staff attended a meeting with 208 South Lamar contractor Stefano Capomazzo, engineer Chad Fowler, the City’s senior building inspector Chris Carter and the City’s development services director, Hollis Green. During the meeting, City officials were informed by Fowler and Carter that the building is structurally unstable and unsafe.

A special meeting was called by the Commission on Friday to discuss the COA to demolish the building, which was requested by the building’s owner, Tim Smith, and Currence.

During the meeting, Carter presented a photo of the east wall, which faces South Lamar. The photo showed deteriorated brick, which had been covered by a black plaster; however, the bricks had not been re-mortared over time, leading to deterioration. That particular wall is load-bearing and gave Carter immediate concern over the stability of the structure, he said. 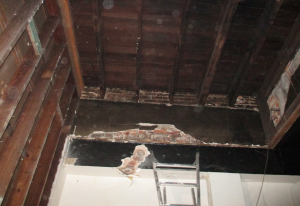 A photo of the deteriorated bricks inside the building at 208 South Lamar was show during the special meeting on Friday. (Chris Carter/Oxford building official)

“I would say that is indicative of what the rest of the wall is going to look like,” Carter told the commissioners. “If the whole wall is indeed like that, any further operation could cause it to crumble. … To ask guys go in there and work on that building right now, even to try to demo it, is a scary thought, to be honest with you.”

Commissioners asked if they approved the request to demolish the building, what would happen to Square Books, and other buildings to the west. Fowler, who is the structural engineer for Smith, stated their plan would be to work top to bottom and possibly even go “brick by brick” when demolishing the structure to ensure the integrity of the surrounding buildings and the safety of the public.

“There shouldn’t be any negative effect to the Square Books building,” Carter told the commissioners.

The building at 208 South Lamar was constructed in 1880 and has seen several renovations over the years, including a major renovation project in 1945. The Historic Preservation Commission was already aware of the structural concerns of the building, having previously approved the demolition of the south wall last November. The request to demolish the structure and build a new three-story structure was tabled during their regular meeting last October.

When a COA to demolish a structure is approved, the Commission commonly has a new site plan or landscaping plan for what the site will turn into to approve as well. With the urgency and expediency of the issue with the building, there was not a new site plan, but Currence told the Commission he intends to still build his restaurant at the 208 South Lamar location.

“This is not anything we ever entered into lightly,” Currence said after the meeting. “All of us are preservationists at heart, and I think my record and Stefanos’ record alone illustrates that fact pretty clearly. When you look at the properties that we’ve been involved with and preserved over the years on the Square, around the Square, my home, all of it’s the same thing. … The condition of those building materials has deteriorated so badly there’s not the integrity there to support for any prolonged period.”

A timeline for when the demolition plan would begin was not known, but Carter urged the issue be handled as soon as possible, and referenced the issue New Orleans is experiencing with the fallen Hard Rock Hotel structure, stating, “That can’t happen in Oxford.”

The sidewalk and lanes on South Lamar Boulevard will remain closed until the area is deemed safe for the public and safe for normal traffic patterns to resume.