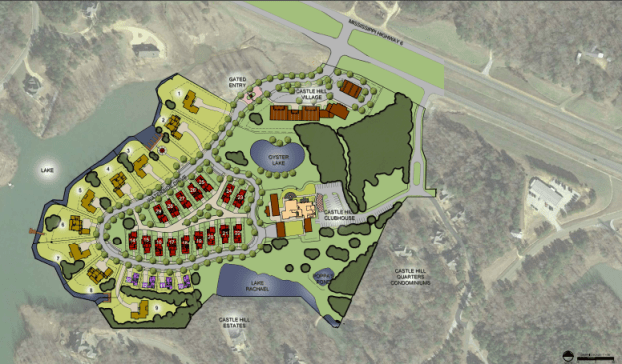 The rendering of the proposed planned urban development includes 29 homes and a commercial village at Castle Hill.

A new planned urban development at Castle Hill was not able to get off the ground this week.

During their regular meeting on Monday, the Lafayette County Planning Commission denied the PUD request made by Colonel’s Quarters at Castle Hill owner Jean Abrams.

Abrams proposal, called Waterside at Castle Hill, consisted of a commercial space and 29 homes. Nine of the homes would face the lake, with the remaining 20 homes constructed along the interior of the PUD.

The commercial village would have included a grocery store, gas station and a wine and spirits store, according to Abrams’ PUD packet. Abrams asked the commission to rezone roughly three of her 47 acres to be compatible with what the state designated the land as a qualified resort area in 2006.

After a lengthy discussion at the end of Monday’s meeting, the planning commission voted to deny Abrams’ request.

“We bought this land in (1997) and we bought 150 acres, and we knew that we did not want to live on 150 acres,” Abrams said after the meeting. “We knew 20 years ago that we would be developing the land. We just did it in stages. First we did Castle Hill Estates, then we did the condos and now we’re ready to develop the last piece of the puzzle.”

In 2018, Abrams stated she informed Castle Hill residents of a town hall she held where she revealed her intentions to propose the PUD. Several people, including residents of The Highlands, a neighborhood adjacent to Castle Hill, who were in attendance at Monday’s meeting claimed they never received an invitation, nor attended such a town hall. A couple people in attendance did claim to have gone to the town hall.

Other objections from those in attendance included the lack of due diligence done on Abram’s part before proposing the PUD to the planning commission. A few residents retained developer Stewart Rutledge earlier that day as their representative who spoke on their behalf.

“There’s two main issues here: it’s the authority to change zoning and then some of the more site-specific issues,” Rutledge said to the commission. “Even Ms. Abrams herself acknowledged (the PUD) would just be a nice alternative for a gas station, a liquor store. That in and of itself proves there’s no public need. … Just from a procedural sense I would request y’all, not table it, but deny this entire PUD.”

“In my opinion, and it’s only my opinion, they zoned this land as incompatible with what the state had zoned it 12 years prior,” Abrams told the Board.

Lafayette County building official Joel Hollowell clarified the Board’s stance with their 2018 approval to zone the land as residential estate.

“This area was a little bit of a difficult area for us as we decided how this needed to be designated,” Hollowell said. “There happens to be a bed and breakfast that existed there. There happened to be a conference center that existed there. So, it was natural for Lafayette County to go ahead and incorporate that area, even knowing that it was a qualified resort area. Even knowing that it was natural for us to put that (residential estate) designation on that property. It wasn’t a mistake. We did that intentionally.”

Hollowell told Abrams she could rework the PUD, take the commercial part off and return to the planning commission to get approval of the residential portion.

Issues discovered during a renovation project at 208 South Lamar has created a concern for safety and a discussion about... read more