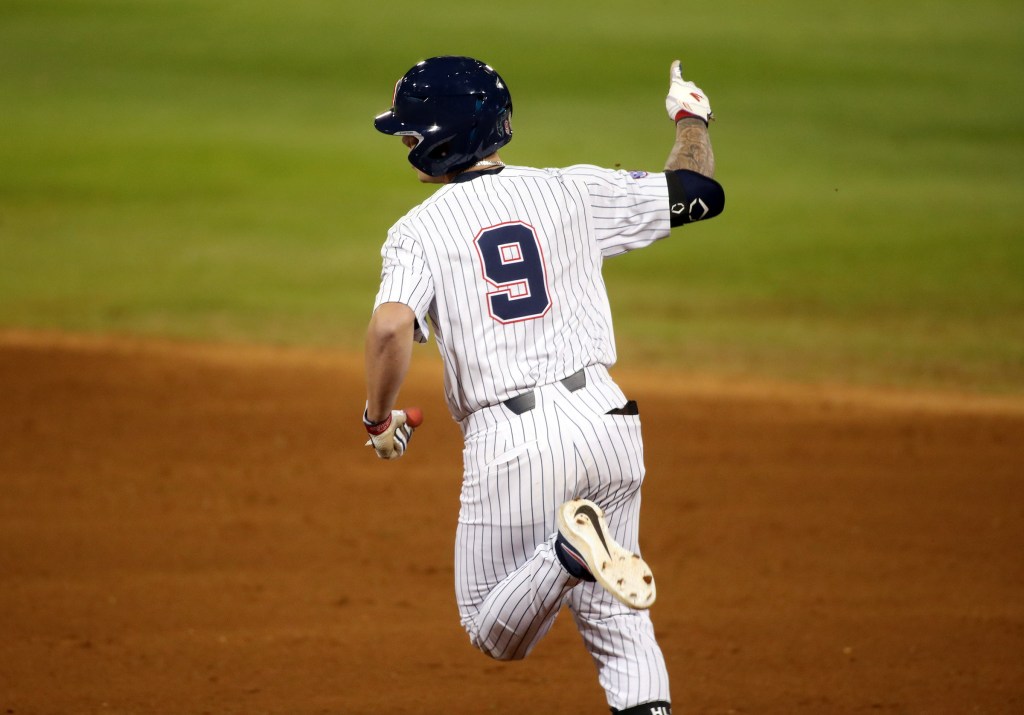 Bases loaded is back! Every Friday (and the rare Thursday), we’ll take a look at four pressing storylines heading into the weekend for Ole Miss baseball. This week, the 7-1 Rebels hit the road for the first time, traveling to Greenville, N.C. to take place in the Keith LeClair Classic, hosted by East Carolina University.

The Rebels have won seven baseball games in a row.

A weekend drubbing of Xavier resulting in a 35-3 aggregate score was enough to jump Ole Miss to No. 15 in the D1Baseball polls, 10 spots above where they started the season just two weeks prior. On Tuesday, taking on Southern Miss at home, Ole Miss needed a bit of late-inning magic, yet another long-ball to come from behind and beat Southern Miss 4-3 and keep the winning streak alive.

First base: Can Hayden Leatherwood make it into the everyday lineup?

Quite literally, the last two times Rebel junior Hayden Leatherwood has swung the bat in a baseball game, he’s hit two home runs. The former Vanderbilt signee, who ended up playing two years at Northwest Mississippi Community College, is hitting .545 in a Rebel uniform. The problem is, head coach Mike Bianco hasn’t been able to find a regular spot for him in the lineup. Leatherwood, a primary outfielder, has made just four starts either in the field or as a designated hitter.

When he’s at the plate, he’s been electric. Leatherwood only has 11 at bats, but has six hits including two home runs in those 11 at bats. Against Southern Miss on Tuesday, it was Leatherwood’s two-run, pinch hit home run in the bottom of the seventh that lifted Ole Miss to victory. The junior can clearly swing the bat, but it remains seen if Bianco will find a spot for him more regularly in the lineup.

The last two times Hayden Leatherwood has swung the bat, the ball has gone over the fence.#HottyToddy | @HLeatherwood9 pic.twitter.com/yfKHl02vDr

Second base: How will Ole Miss handle their first true road test with No. 21 East Carolina?

The competitive highlight of the weekend trip to North Carolina is a Saturday afternoon tilt with Mike Bianco’s former Ole Miss assistant, Cliff Godwin. Godwin, who was in Oxford from 2011-2014, has built the Pirates into a consistent contender.

On Saturday, Ole Miss and Gunnar Hoglund will face off against ECU right-hander Tyler Smith. Through two starts this season against William & Mary and Georgia Southern, Smith has allowed only four total hits and one run. In 26 career starts, he owns a 16-2 record.

In 2017, Ole Miss swept ECU in a season opener at Swayze Field. Last season, the Pirates took a return trip to Oxford, beating Ole Miss 3-2 in a game where ECU’s Jake Kuchmaner carried a no-hitter through 26 outs.

Through the opening two weeks of baseball, Ole Miss has already notched four individual weekly award winners. After a two-home run Saturday against No. 1 Louisville on opening weekend, junior Cael Baker was named both the SEC Co-Player of the Week and the Golden Spikes Award Performance of the Week. Following the second weekend’s beatdown of Xavier, Anthony Servideo was named National Player of the Week by Collegiate Baseball and Doug Nikhazy was named the SEC Pitcher of the Week for his part in the team’s combined-no hitter on Friday night. Does week three have another weekly winner in store?

At Bat: Can the home run pace continue?

Through eight games of play, Ole Miss has hit more home runs than any other college baseball team in the nation. With 17 long balls to this point in the season, Ole Miss is averaging 2.13 home runs per game. But actually, all 17 of the home runs have come in the last six games, a six-game record in the Mike Bianco era of Rebel baseball. Over the course of a season, the Ole Miss home runs record sits at 98, set in 1998. Ole Miss is currently on pace for 119. The most surprising long-ball culprit to this point of the year has to be Anthony Servideo. At 5-foot-10 and 175 pounds, Servideo is tied for the team high with four home runs, tied with 6-foot and 260-pound Cael Baker.

Weekend schedule, where to watch or listen: