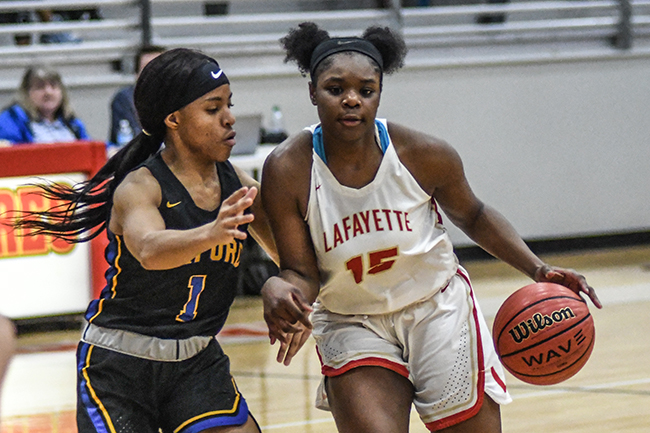 The Lafayette girls have been here before, exactly one year ago.

For three straight seasons, the Lady Commodores basketball team has been among the best in the state of Mississippi. In that three-year stretch, of which many of the current senior class members were the major contributors, the team has amassed a 72-16 record. However, they haven’t played in a state final over this stretch.

A year ago, they lost in the quarterfinal game, the same game they play in this Saturday. This senior-laden class is aiming their sights higher this time.

“Every year, we get to the same spot. This year, we all want it, we’ve all been here,” senior Azariah Buford said. “We’re planning on going further this year, and I think we’re ready. We just have to put everything into it, give it all we’ve got.”

Lafayette coach Shayne Linzy has a relatively simple goal for his girls at the start of every season: go one game further than the prior year. In 2018, the team lost in the state semifinals. A year ago, they came up short of that goal, losing at home in the state quarterfinals.

A win this Saturday can achieve that goal of going one game further than the prior year.

“I definitely see the winner of this game with a real shot of winning it all. They’re very calm and relaxed, because we’ve been here before,” Linzy said. “Some teams are celebrating because they made the playoffs. We’re mad if we don’t. We expect to be here, and it’s not always going to work out that way. But it’s our expectation. We’ve had great practices this week, and we’re ready to play.”

For each of the past two years, the girls have lost to the future state champion. Linzy thinks whoever wins Saturday’s game against Columbus has a serious chance.

Lafayette and Columbus have not played this year, but Linzy describes them a lot like themselves – a slashing team lacking in size, but with multiple athletes who can do multiple things. At 23-4, it’ll be a huge test for the Lady Commodores.

“They’re long, not tall but long, very athletic and fast. They’re really aggressive going towards the basket,” Linzy said. “They’re in the same mold of a lot of teams we’ve played this year. It’s a different name on the jersey, but at the same time, every single player they put on the floor is an athlete.”

The Lafayette girls play Columbus from Itawamba Community College on Saturday at 4 p.m.