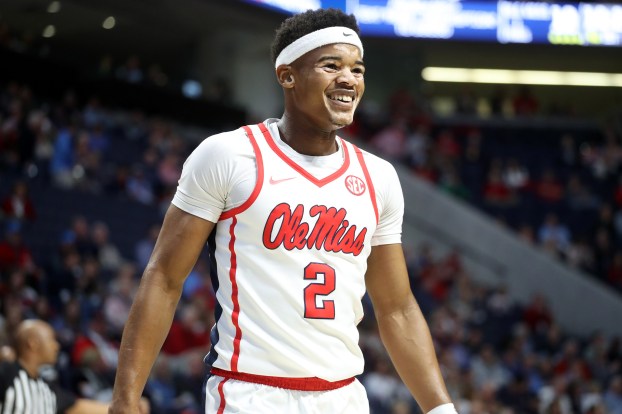 Ole Miss Men's Basketball vs Vanderbilt on February 29th, 2020 at The Pavilion in Oxford, MS. Twitter and Instagram: @OleMissPix Buy Photos at RebelWallArt.com

Ole Miss just put together one of the most dominant performances in the Kermit Davis era.

The Rebels snapped their four-game losing streak on Saturday, simply dominating Vanderbilt at the Pavilion by a final score of 86-60.

Playing one of the worst teams in basketball – Vanderbilt is 1-34 in their last 35 SEC games – Ole Miss got on top very early. Opening up a 13-1 lead to start the game, four consecutive three point buckets by the Commodores sparked a little run that gave Vanderbilt their first and only lead in the game at 17-15.

“We got off to a great start, we put in our three guys off the bench, and it didn’t go so well for about a minute and a half,” Davis said. “All of a sudden the game was tied, and then they were up. When we put them back in, they really played well. Sammy (Hunter) played a lot better, Austin (Crowley) too. The ball movement, we were sharing the ball, and we had a couple of really good possessions in the second half”

Then Ole Miss simply put them away. The Rebels held Vandy to ten points over the final 11 minutes of the first half, a 28-10 run that saw Ole Miss take a commanding 43-27 halftime lead.

Khadim Sy was incredibly active during that large run, scoring 10 points and adding five rebounds over the course of the first half.

The second half was simply more of the same for the Rebels, more of dominance by the Rebels. Ole Miss outscored Vanderbilt by ten in the second half, never once making the outcome seem in doubt.

“I was really proud of Khadim’s (Sy) effort,” Davis said. “We had a meeting yesterday, and he felt bad about the Auburn game. He’s had some good practices and has been very vocal. Today, he gave us a great lift in the first half. The biggest stat to me is we had 26 assists on 35 made baskets. The ball really moved today.”

For much for the final minutes, the story had nothing to do with the final score, but of walk-ons playing multiple minutes and Ole Miss hitting some marks that haven’t ever happened in the Kermit Davis era.

The 86 points scored tied the season high. Accumulating 26 assists on 35 made baskets, something that greatly pleased Davis, was the most of any game since he’s taken over as head coach.

Devontae Shuler lead Ole Miss in points with 18, but all five starters scored in double digits. KJ Buffen finished with 17 points and 6 rebounds.

With the win, Ole Miss advances to 14-15 (5-11 in the SEC). The Rebels return to the Pavilion on Wednesday for a meeting with Missouri before closing the regular season in Starkville against Mississippi State.

The 2019-20 season has not lived up to expectations for Ole Miss on the basketball court. After Kermit Davis’s inaugural... read more