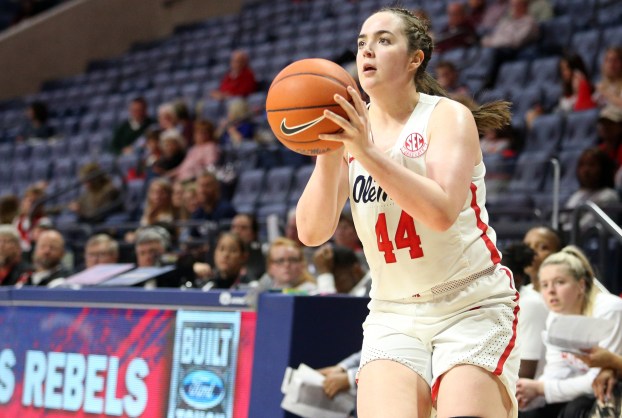 Yolett McPhee-McCuin knew this year was a season in transition, but that does not mean the results are not disappointing.

Ole Miss fell to No. 10 Mississippi State 84-59 at The Pavilion on Sunday to cap the 2019-20 regular season. The loss also gave the Rebels their first winless season in Southeastern Conference in program history, and the first 0-16 record in the SEC since league play expanded to 16 games in 2012.

“Those first 19 minutes was a preview of what it will look like starting next year, as far as the Mississippi State-Ole Miss rivalry,” McPhee-McCuin said. “I thought that we came out nervous, anxious and really wanted to play our best basketball.”

Ole Miss tied the game three times throughout the first 20 minutes. With the game tied at 32-all, the Lady Bulldogs responded with a press in the final 60 seconds of the half and used it to go on a 14-0 run before halftime.

Mississippi State kept the pressure on to begin the second half, keeping the Rebels at bay.

“We just got anxious and went away from the game plan,” McPhee-McCuin said. “I’m thinking maybe I should have taken a timeout in the last minute (of the second quarter). It was no way I thought they would go on a 10-0 run with a minute left. … We just unraveled and I thought that took the air out of us and we couldn’t recover.”

“I’m excited about Torri’s future,” McPhee-McCuin said. “She was great for the program as far as just sticking with it and not bailing like a lot of the other players did. It’s not like she had to stay. (The University) was going to support her financially and academically until she got her degree. … I asked her to stay and she wanted her legacy to be one where her son knows she finished what she started.”

Ole Miss heads to Greenville, S.C. for the SEC Tournament next week. The Rebels will play on March 3 in the second game of the first round against No. 11 seed Missouri. Tip off will be 25 minutes after the conclusion of the 10 a.m. CT game and will be televised on SEC Network.

Mississippi State gets a bye into Friday’s quarterfinal round as the No. 2 seed.

FULTON – Late game mistakes can be brutal. They can end seasons, and they can make heroes. On Saturday afternoon... read more