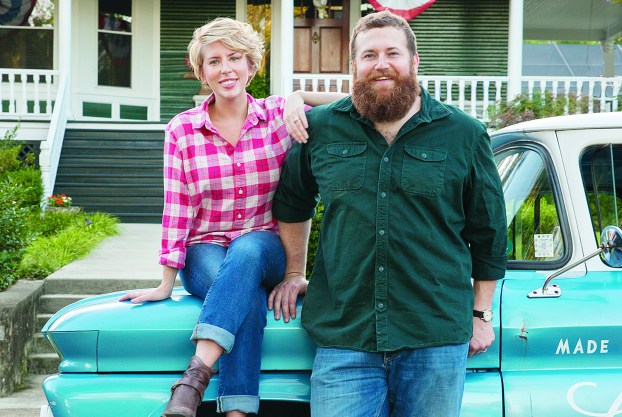 Ole Miss alumnus Ben Napier (right, pictured with his wife, Erin Napier) will be designing the bar top for McCormick’s at the Inn at Ole Miss. (Photo Contributed)

The Inn at Ole Miss is getting a hometown feel this spring.

When the hotel located on the University of Mississippi’s campus announced last December the new McCormick’s, a restaurant and bar, one of the highlights was a bar top to be designed and built by Ben Napier. Napier, a 2007 Ole Miss graduate and star of the HGTV show “Home Town” with his wife Erin, jumped at the opportunity.

“I’m always interested in doing woodworking projects for a group I’m passionate about, and Ole Miss happens to be one of them,” Napier said.

Initially, the design phase of the project went toward Napier wanting to do a butcher block bar top. After discussions with the McCormick’s designers, Napier said he began thinking about his father, who went to graduate school at Duke University. Located on Duke’s campus was a popular dining spot called the Oak Room, which closed in 2003. The restaurant got its name from all of the furniture and paneling made out of oak trees on the interior.

Feeding off that memory of visiting his father and the Oak Room, Napier came up with a similar idea of using slabs of oak that came from trees located on the Ole Miss campus. Napier said he reclaims the wood from trees the University has taken down, and he is planning to spend the next couple months looking for the perfect piece of wood for the bar top.

“I don’t want it to look like, ‘Oh, this looks totally different from everything else in the bar,'” Napier said. “Because Oxford has plenty of bars and this one being on the campus, we don’t want it to feel like it’s just something that’s thrown together for college kids to come and get drunk at. You want it to feel like the campus and like the architecture on campus. You want it to look like something alumni to be proud of and want to come and visit.”

Since the meetings took place last year, Napier has been filming the latest season of “Home Town” and has not been able to begin work on the bar top. With his shooting schedule taking a break before they begin work on a new show called “Home Town Takeover” later this year, Napier will use the spring months to complete the project.

Napier has rehabilitated many houses in Laurel, where he and Erin now live, as well as completed woodworking projects for many other groups. Being asked to design a project where he met the “love of his life” — and was later married —  and earned his degree is providing a little more pressure to get it right, he said.

Napier was not an Ole Miss fan before he enrolled. He came to Oxford because his two roommates at the time were coming to Ole Miss and Napier said, “Alright, I’ll do that.” Since then, Oxford and Ole Miss has found a home in Napier’s heart.

“It’s a special place to us,” Napier said. “To be able to build something that is going to be a part of the campus at Ole Miss, that’s a dream for anybody who goes to Ole Miss to be able to put their mark on something there. Hopefully, the University will be around another 150 years or so and that’s a legacy that you can leave behind. What has developed into my forté is building things that not only are beautiful and functional, but also tell a story.”

During this current season of “Home Town,” which airs on Mondays on HGTV, a piece of Ole Miss will be featured in an upcoming episode. Napier used a slab of wood from campus to design a furniture piece, which will be included in a home they rehabilitate.

A Batesville man is facing burglary charges in connection to three separate incidents. On Feb. 26, officers with the Oxford... read more