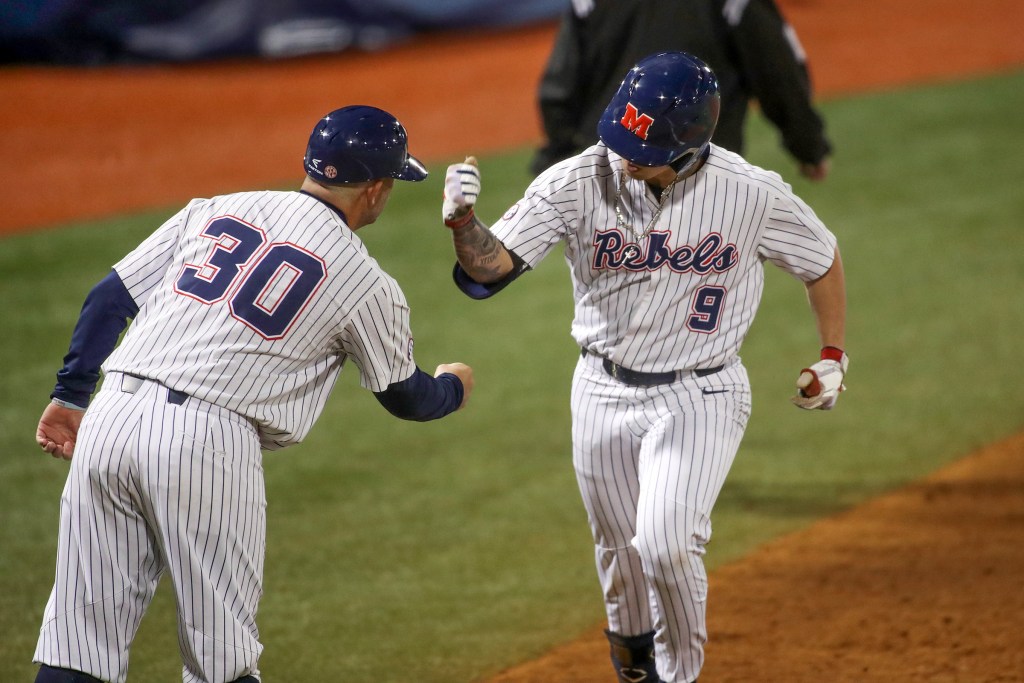 Ole Miss has not lost a baseball game since Valentine’s Day.

The Rebels went on the road for the first time this season over the weekend, playing three games in Greenville, N.C. for the Keith LeClair Classic hosted by East Carolina University. They didn’t lose once, including a 2-1 win over No. 21 ECU, their third ranked win of the season.

No. 15 Ole Miss played three games over the weekend, with wins over High Point and Indiana in addition to the ECU win. Here’s three short recaps from the weekend, and a few observations as the Rebels have won 10 straight baseball games:

Coming off his no-hit outing against Xavier, Doug Nikhazy wasn’t quite as dominant on Friday but was equally effective. The Rebel lefty picked up his second win of the season, allowing just four hits and two runs over 5.2 innings pitched. Ole Miss was actually out-hit by High Point on the evening, but the Rebels had the clutch, big hits when it matters.

Tyler Keenan went deep in the first, scoring two runs. The Rebels added one more in the 5th before High Point tagged Nikhazy in the fifth for two runs to cut the lead to 3-2. Cade Sammons and Peyton Chatagnier added a pair of RBIs in the sixth before Ole Miss got the insurance in the ninth, winning 6-2.

Pitcher of the week for Ole Miss would go to Gunnar Hoglund. The sophomore allowed allowed five hits in his start against No. 21 ECU on Saturday, but didn’t allow a single run over his six innings of work. The reliever duo of Max Cioffi and Braden Forsyth took over in the seventh, finishing out a game for the Rebels that included no earned runs credited to pitchers.

The only run for ECU on the game came in the first off an error. Ole Miss took no time recovering from their early blunder, scoring two in the second inning off an RBI double from Tim Elko and a sacrifice fly from Jerrion Ealy. At 2-1 Ole Miss after two innings, not a single other run was scored in the game.

Where Saturday was defined by the pitchers, Sunday was more of an offensive battle. Ole Miss an Indiana combined for 19 hits in the final game of the road trip, with the Rebels putting together a big seventh inning to break the type and pull off the sweep.

Ole Miss scored four runs in the seventh for the win. With Chatagnier and Keenan on base after a walk and single, respectively, a single up the middle from Justin Bench scored both to break the 5-5 tie. One batter later, Kevin Graham brought himself and Bench home with a two run shot to right center, giving the Rebels the 9-5 lead they would leave North Carolina with.

1. Tyler Keenan had a homecoming to remember

A native of Clayton, N.C., just over an hour west of Greenville, Ole Miss junior third baseman Tyler Keenan had quite the weekend in his return to the Tar Heel State. Keenan went 7 for 13 on the weekend from the plate with, four RBIs, two homers. In Sunday’s win, Keenan went 4 for 4 with a homer and two RBIs.

2. Gunnar Hoglund off to a much hotter start than his freshman season

After his hot start that endeared the mullet-clad first baseman for Rebel fans, Cael Baker has hit a rough patch. Starting all three games in Greenville, the junior did not record a single hit. Over his last 13 at-bats, he hasn’t had a hit. In general, as good as the big-man is at taking the ball deep, Baker only has three hits on the season that weren’t long balls.

Now 10-1, having won 10 straight after the season-opening loss to Louisville, Ole Miss will play eight of their next 10 games at Swayze Field. Next up, a Tuesday meeting at home with 8-3 Memphis. Ole Miss will host Princeton this coming weekend.