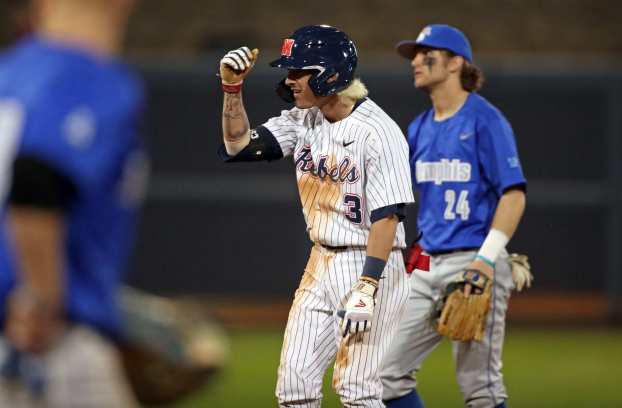 The Rebels took advantage of 12 free passes (11 walks, one HBP) by the Tigers that led to three runs scored off a walk or wild pitch. The bats went for seven hits, led by Anthony Servideo who went 2-for-3 with two runs scored and two RBI.

On the mound, Jackson Kimbrell earned his first career win in his first career start, going 3.0 innings with two strikeouts, giving up two hits and just one earned run. The Rebel bullpen was active the rest of the game, using five different pitchers until the final out.

Kimbrell went 1-2-3 in the top of the first, including an acrobatic catch by first basemen Kevin Graham in foul territory to get the second out.

The Rebels quickly placed a runner in scoring position in the home half of the first. Peyton Chatagnier drew a four-pitch walk to start the game, stole a base and made it to third off a wild pitch. Servideo singled back to the pitcher to bring him home one batter later. The junior out of Jupiter, Florida, came around to score off the Tigers’ second wild pitch of the first to make it 2-0 Rebels early.

The Tigers threatened in the second frame when their first batter reached on a single and stole second, but Kimbrell retired the next three including a swinging strikeout for the third out to get out of the jam early.

In the bottom of the third, Memphis got on the board after two walks and a double by Hunter Goodman that scored the man on second. Chatagnier doubled off the left field wall to start the bottom half of the third, but Ole Miss couldn’t cash in.

Wes Burton relieved Kimbrell in the bottom half of the fourth and gave up two hits but left the inning unscathed after tallying two punch outs to end the frame.

Ben Van Cleve walked to start the bottom of the fourth. Reaching second on a wild pitch, he scored on a Hayden Leatherwood single to left-center that turned into a double on an error. Leatherwood, after making it to third on a groundout, came around to score easily on a wild pitch to make it 4-1 Rebels after four played.

Austin Miller came in to relieve Burton after the freshman went 1.1 IP, leaving a man on second with one out in the top of the fifth. Miller made easy work of the Tigers with two swinging strikeouts to get out of the jam.

Chatagnier walked to get on base for the third time in as many plate appearance to start the Rebel half of the fifth. A single by Justin Bench got the freshman into scoring position before Servideo walked to load the bases. The Tigers’ fifth free pass of the night gave Tyler Keenan an easy RBI when Chatagnier walked home for his second run of the night. However, a new arm out of the Memphis bullpen came in to strike out the side and the Rebels stranded the bases loaded, scoring only one run in the inning.

Bottom of the sixth saw Ole Miss add to its lead. John Rhys Plumlee reached base for the first time this season with a hit by pitch, and he eventually came around to score on a wild pitch to make it 6-1 Rebels.

Next Rebel half of the inning, Plumlee plated Jerrion Ealy on a sac fly with the bases loaded.

Tyler Keenan added to the home lead with a double in the eighth inning, scoring Servideo to make it 8-1 Ole Miss.

The Rebels stay home this weekend when they host Princeton for a three-game series. First pitch for Friday is set for 6:30 p.m. CT.