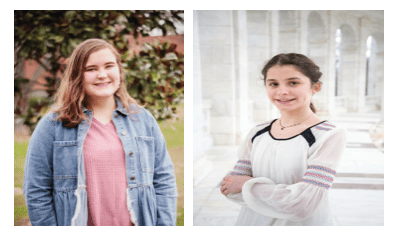 Claire Anne Pugh (left) and Elliott Clark (right) were honored for their work with the Lafayette Middle School student council.

Two Lafayette Middle School students have been working to make life better for their fellow classmates and were recently honored for their respective leadership.

Elliott Clark and Claire Anne Pugh are two LMS student council members who have received national recognition. Clark was selected as a member of the National Association of Secondary School Principals (NASSP), and Pugh was awarded the bronze medal in the 2020 Prudential Spirit of Community Awards in Mississippi.

Clark is a seventh-grader at LMS and the vice president of the student council. The NASSP is an organization that is the voice for principals and other school leaders across the country, and it seeks to transform education through school leadership, recognizing that the fulfillment of each student’s potential relies on great leaders in every school committed to the success of each student.

Part of being recognized by the NASSP included a trip to Washington, D.C., where Clark was able to meet some of the state’s and country’s leaders in Congress. Clark participated in advocacy training and lobbied on Capitol Hill.

“(It was) very overwhelming,” Clark said of her experience in the nation’s capital. “Especially because I was a middle schooler and most of my committee aside from one student was high schoolers and adults. … I got so much insight from other people. I really got to find out other students’ point of views and how to help my student council, not only expand, but to develop.”

Clark applied in September and was notified of her acceptance by the NASSP in November.

Looking to come up with an idea for a project she was assigned, Pugh created “Circle of Friends,” and in turn was honored by the state for her efforts. The program takes student council members and pairs them with special needs students in sort of a “Big Brother-Big Sister” type of way, according to Pugh, to spend the day with each other.

“We take them to do stuff; we hang out with them and do stuff with them,” Pugh said. “I was kind of shocked, because I didn’t really know about (the award), and then when I heard about the award I was really shocked. I didn’t really want to get an award out of it, I was just doing it to do it.”

The program included Pugh being required to fill out grants, recruiting volunteers and gaining support from the school’s administration. The program has impacted nearly 100 students throughout the Lafayette County school system since Pugh created the club during the 2018-19 school year.

Of the 91 Mississippi students who have earned a bronze medal, only 8.7 percent of them were middle school students. Pugh was honored during the Lafayette County School District’s Board of Trustees March meeting on Monday.

Parents who were hoping to sign their children up for Pre-K in the Oxford School District will have to wait... read more