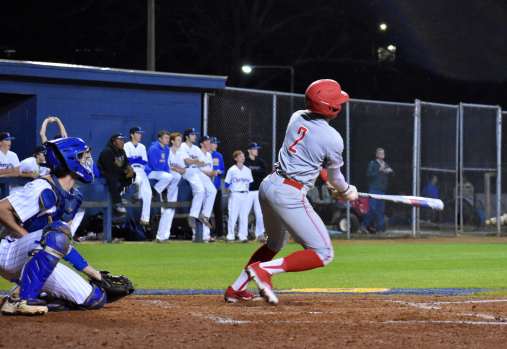 Lafayette's Tyrus Williams hits a home run to give Lafayette a 2-0 lead in their game against Oxford on Tuesday, Mar. 3, 2020 (Nathanael Gabler / Oxford Eagle) 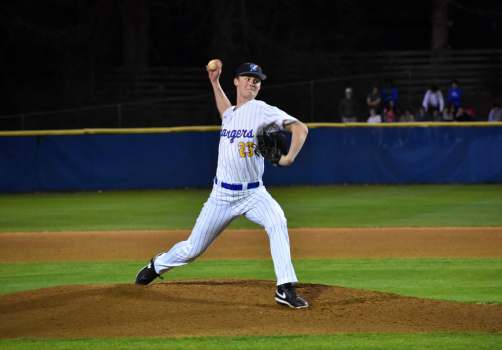 Playing on the road at Oxford in the first of two rivalry games between the schools, William’s fifth-inning run home run gave Lafayette some insurance in a low-scoring, 2-1 win for the Commodores on Tuesday, part of a big all-around performance for him on the night.

“That was really fun,” Williams said. “Really fun. The home run was a fastball inside. I hit it and put my head down running. When I got to first, that’s when I noticed it was high enough and going to go over. That felt amazing.”

It took both starting pitchers some time to catch their footing on Tuesday night. The first inning of play from Edwin Moak Field lasted 32 minutes. Williams led things off for Lafayette with a leadoff blooper, later scoring on an RBI fielders choice play from Hunter Coleman. The Commodores would strand two baserunners in the opening frame that could have netted more damage.

Oxford also had a big chance of their own in the first. With the bases loaded after a hit and a pair of walks, Oxford drove a ball to deep left center field, where Williams, again, made a beautiful play tracking the ball to prevent the Chargers from scoring at least three.

Both pitchers settled in a little more after that first inning. Oxford starter Owen Bruce struggled early with location and walks, especially in that first inning. Later in the third, with two Commodores on base and just one out, Bruce finally found his stride. He struck out two straight Commodores to end the frame before getting his first one-two-three inning in the fourth.

For Lafayette on the mound, Taylor Tarver’s fastball was touching 84 mph early. He worked his way around Charger baserunners for four scoreless innings to start the game, but Tarver’s velocity began to dip into the fifth inning, as his pitch count crested 90 innings. Walking the first batter of the fifth, Tarver worked his way around a jam yet again, getting the inning-ending strikeout with two on base to preserve his win.

“We’re not very good offensively right now. We’re not producing and we don’t have older guys producing. We practice things and do things right every day in practice and batting practice and then they don’t carry things over into a game,” said Oxford head coach Chris Baughman. “Right now, we’re doing things at the plate that we don’t do in practice and isn’t who we are. It takes some guts and some discipline. We get in front of a crowd and try and become people we’re not and try to hit the ball 400 feet.”

That true game-breaker came in the fifth, again from Williams.

The Commodores sophomore caught a high fastball pure on the heart of the bat, hitting a line drive over the left field fence for a home run, stomping on the visiting home plate as he rounded through. In a low-scoring game, Williams’ deep shot which extended the Commodore lead to 2-0, proved to be the difference.

“Tyrus has a pro-approach. He knows what he’s doing. But if I’m being honest, he hasn’t had the best start to the season. He’s had good games, but not the kind of guy we know he is. Tonight, he broke out,” said Lafayette head coach John Walker. “We know, everybody knows what he can do. He’s special. There’s not anything out here I don’t think he can do.”

Sam Bianco made things interesting in the bottom of the seventh. Leading off the frame with a single off Lafayette’s Wilson Varner, Bianco quickly advanced to second base on a wild pitch. Lock Elliott walked as the next batter to bring the winning run to the plate. But like the Commodores were able to do all night, Varner worked his way out of the jam. Oxford got one run off a bad throw on a double steal attempt, but Varner was able to strike out the final batter to preserve the 2-1 win.

“Those two were really good tonight on the mound. They put themselves in some jams with walks, and they pitched out of it,” Walker said. They were good but that’s what we expect of them. I’m pleased with how we’ve pitched in just about every game we’ve played.”

Next up for Lafayette, the Commodores take on Ripley on Thursday at Pontotoc. Oxford travels Friday to South Panola.