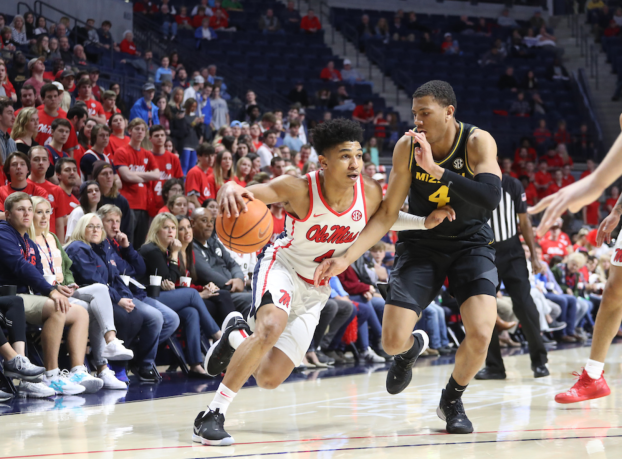 Breein Tyree dropped 19 points on senior night and didn't miss a shot in the second half. Photo via Ole Miss Athletics. Instagram and Twitter: @OleMissPix. Buy Photos at RebelWallArt.com

Ole Miss seemed like they wrapped up senior night early, but they had to create a little drama early in the second half.

The Rebels took a nine-point lead to half in a game that felt like they could get anything offensively. They then went over seven minutes to start the second half without making a bucket. In the end, they were able to turn things around and hang on, beating Missouri in their home finale for 2020 by a final score of 75-67.

“This was a good win for us,” head coach Kermit Davis said. “That’s a good (Missouri) team and will be a really tough team in the tournament. … It was good for us. We really guarded in the second half and I think the key was holding them to 29-percent (shooting) in that second half.”

Blake Hinson is about as streaky as any player the Rebels have had in the past decade. When he’s hot, he’s incredibly difficult to stop. When he’s off, it can be ugly.

On Wednesday night at The Pavilion, Hinson got red hot early. The Rebel sophomore’s season high is 23 points. In the first half alone against Missouri, he went for 19 points on 7 of 12 shooting. The 19 was more than he’d scored in an entire game against any other Southeastern Conference team this season. Hinson wouldn’t score in the second half.

“He can do that. He can just get it going,” Davis said. “He played terrific, got good shots and guys found him. The second half it was kind of hard on him, because he got four (fouls) early and never really got back into a rhythm.”

Hinson highlighted a Rebels half, offensively, that was simply impressive. Ole Miss scored 49 in the frame on 54-percent shooting, including five made threes and a perfect 16 for 16 from the free-throw line. After 20 minutes, they took a 49-40 lead to the half.

Then, things got a little dicey. Ole Miss let the Tigers crawl back into things, scoring only two points in the opening five minutes of the second half and not making a basket from the field until the 12:17 mark. That bucket, a three-pointer from Breein Tyree, changed the whole dynamic.

Tyree, playing on his senior night and final game in The Pavilion, struggled in the first half. The league’s leading scorer in SEC play, he put up only six points in the opening 20 minutes. That three-pointer to end the Ole Miss drought in the second half sparked a second half of play in which Tyree would score 13 and not miss a shot from the free-throw line or the floor. He finished with 19 points.

“I didn’t shoot a lot of shots tonight but I think I really affected the game,” Tyree said. “When they started bringing back the lead, I knew I had to be a little more aggressive. … It’s crazy, that’s my last time going around shaking hands. It was just a great experience for me.”

As a whole, Ole Miss was never truly able to pull away in the second half, partly because of their inability to make free throws for a stretch. After starting the game 18 for 18 from the line, the Rebels missed five of their next 13 to allow Missouri to hang around. In the closing seconds, Devontae Shuler sunk two straight to ice the game, winning 75-67.

Lafayette topped Oxford 2-1 on Tuesday night in the first of two cross-town baseball matchups. Above is a photo gallery... read more