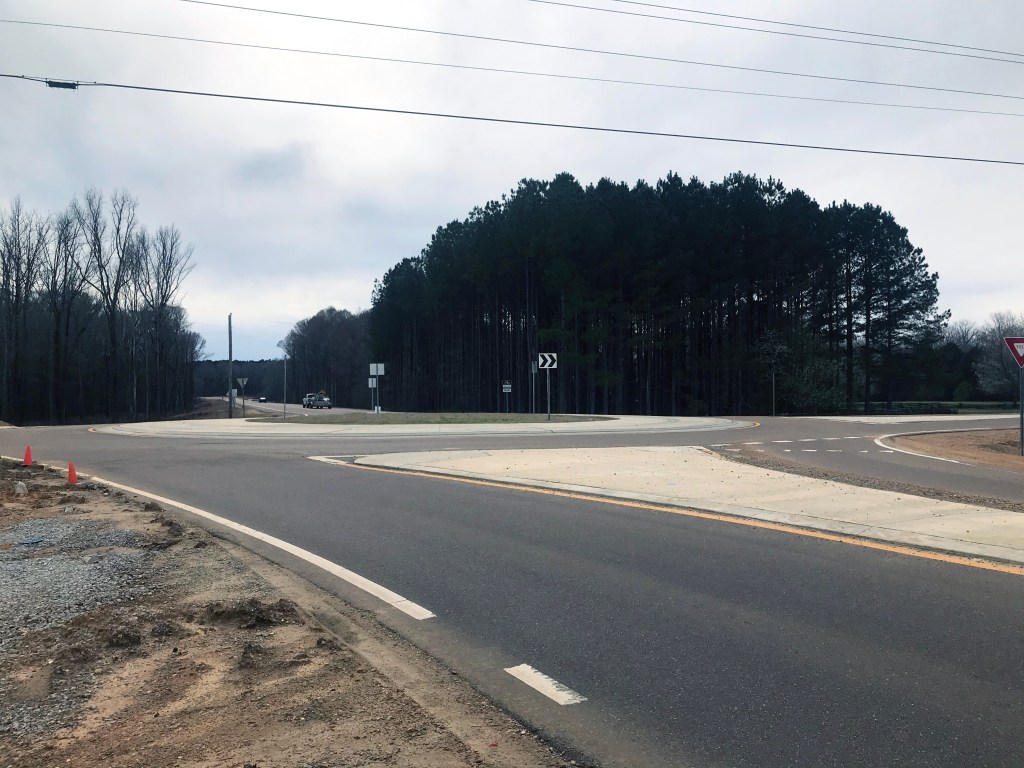 The roundabout at the intersection of College Hill Road and Pat Patterson Parkway will soon get a new street light. The board of supervisors approved the street light during their meeting on Monday, March 2, 2020. (Photo by Jake Thompson | Oxford Eagle)

The newest roundabout on College Hill Road is about to get brighter.

During their meeting on Monday, the Lafayette County Board of Supervisors approved a request to install a street light at the new roundabout at the intersection of College Hill Road and Pat Patterson Parkway. The request was made by District 3 supervisor David Rikard, due to complaints he had received from residents regarding the safety of the roundabout.

“This particular roundabout is in a very rural area,” Rikard said. “It is at the base of a large hill, and it just kind of comes at you from several directions out of nowhere. There’s been numerous requests from the community to have the roundabout lit and personally, I think it’s a good idea.”

The request was unanimously approved, though some conditions were added to the approval.

District 4 supervisor Chad McLarty said he agreed with Rikard that the roundabout, located southeast of mTrade Park, needs to be lit at night, but wanted the language of the request altered. McLarty offered the motion to include language stating the Board would consider requests for lights at other intersections in Lafayette County where the speed limit on the roads leading to the intersection were at least 40 miles per hour.

“(At) $15 a month, if we start lighting up the County, that’s going to get into some money,” McLarty said. “I’m not on board for hanging street lights on existing subdivisions or anything of that nature, but dangerous intersections I do agree (with Rikard) on.”

The Board approved the request with the conditions that any future requests for lighting at intersections have a minimum speed limit of 40 miles per hour and will consider the recommendation of the county engineer.

Oxford School District announces Pre-K registration will not be…