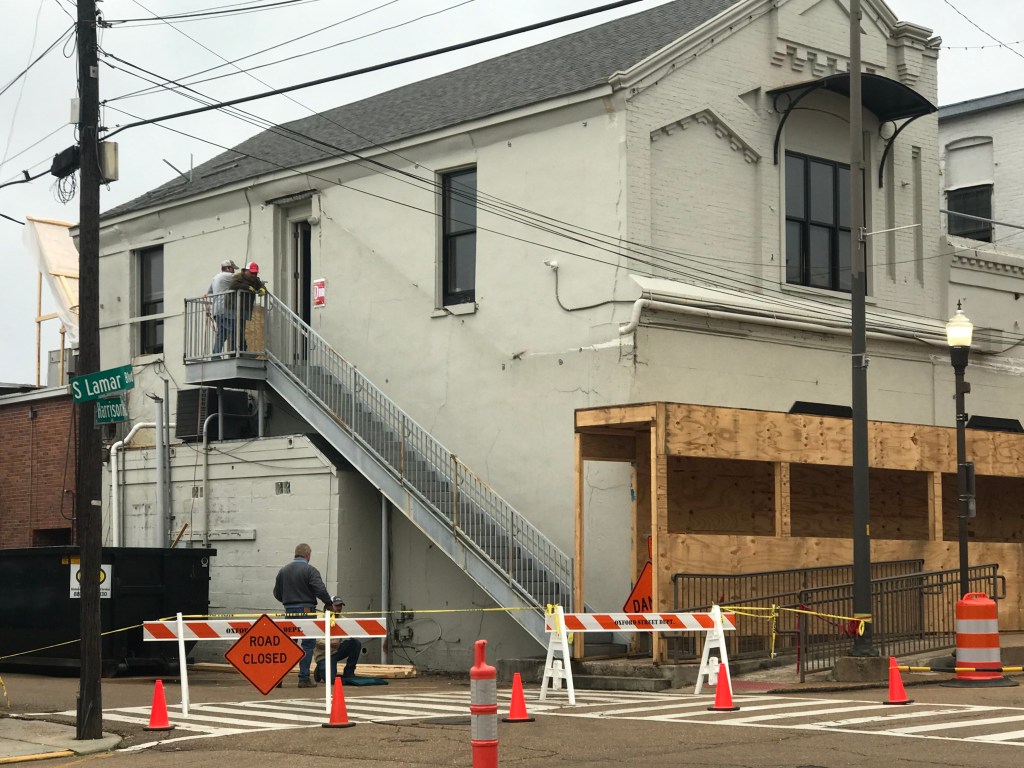 Workers begin demolishing the second floor of the building located at 208 South Lamar. The building was deemed unsafe by city officials last week, prompting the closure of the sidewalks and streets on South Lamar Boulevard.  (Photo by Jake Thompson | Oxford Eagle)

If all goes as scheduled, the building at 208 South Lamar will be gone by the time everyone returns to Oxford after spring break.

The Board of Aldermen granted a request from Chris Carter, Oxford’s senior building official, to allow extended work hours to demolish the structure. Workers began on Wednesday and will continue to work from 6 a.m. to 8 p.m. every day through March 15 to complete the demolition phase as quickly as possible.

Oxford and Lafayette schools, along with the University of Mississippi, will be out for spring break from March 7 to 15, providing minimal traffic around the Downtown Square area while workers tear down the building.

During an emergency meeting on Feb. 28, the Courthouse Square Preservation Commission approved a Certificate of Appropriateness to demolish the building after Carter deemed it unsafe. Carter and other officials were called to the building on Feb. 26 after loose bricks were discovered on a load-bearing wall during a renovation project. The sidewalk on the west side of South Lamar Boulevard was closed off, and traffic was pushed east due to lane closures adjacent to the structure.

Commissioners asked during the emergency meeting if the building could be saved, but Carter told them in his opinion, the building would collapse on its own at some point if left as it was.

“There’s no structural integrity,” Carter said at the meeting.

Structural engineer Chad Fowler told the Commission the demolition will be done “brick by brick,” and that workers will work from top to bottom to ensure the integrity of surrounding structures as well as the public are not harmed. The first floor will be stabilized before any part of the upper portion of the structure is torn down.

Carter added that Square Books will not be affected by the demolition.

Chef John Currence and building owner Tim Smith were in the midst of trying to renovate the building to turn it into a New Orleans-style po’boy restaurant with a rum-themed bar on the second floor and balcony. The commission had approved a previous request to demolish the south wall, but tabled a request by Smith last October to demolish the structure and build a new three-story structure.

Currence informed the Commission he still intends to build his previously planned restaurant at the 208 South Lamar location.