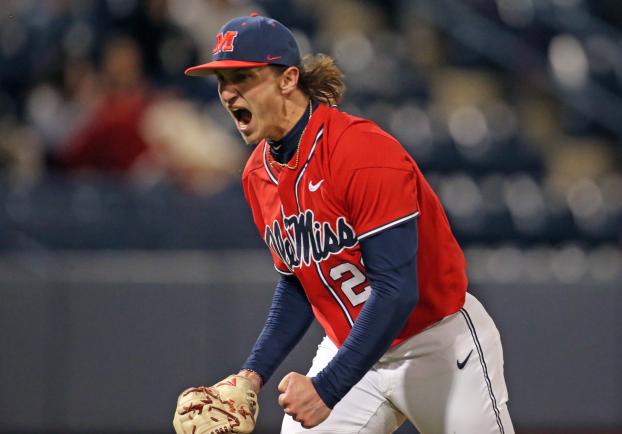 Ole Miss has tied the longest winning streak in the Mike Bianco Era.

The Rebels simply towered over Princeton on Friday night at Swayze Field, using a monster sixth inning to propel a 15-0 win over the Tigers. Ole Miss has now won 12 games in a row, tying the longest winning streak since Mike Bianco took over as head coach in 2001.

“It’s been great obviously. The streak feels good,” said team captain Tim Elko, who went 3 for 4 on the night with a home run. “Right now we’re just taking one win at a time, one game at a time. We don’t want to get ahead of ourselves, but it always feels good to keep winning.”

Doug Nikhazy’s past three starts have been textbook. The Rebels sophomore lefty went six full innings on Friday night, striking out a career high twelve batters and not allowing a hit for his second straight home outing. Over his last three starts, Nikhazy has allowed only four hits and two earned runs, throwing for 17.2 innings in the process.

“I tried to bring a different kind of energy to the ballpark,” Nikhazy said. “I really wanted to create my own energy for myself. That just kind of enhanced the fastball and everything played along off of that, too.”

Ole Miss went through the first few innings of the weekend slowly chugging along offensively. Ole Miss scored one run in the first and the third, both on RBI singles from Tyler Keenan to left field scoring Anthony Servideo. They also tagged on one more run in the fourth inning before the sixth inning explosion came along.

The thirteenth game of the season, Ole Miss batted 13 batters in the sixth inning that featured three home runs, four singles and three walks. In total, eight runs crossed home in the frame, capitalized by a three-run homer from Tyler Keenan to completely break it open.

It’s really been quite the stretch for Keenan. He hit 7 for 13 with two home runs last weekend at ECU and added a two-run double in the mid-week win over Memphis. On Friday night against Princeton, he went 3 for 4 with 5 RBIs.

“That was a good trip for him, it got him going,” said head coach Mike Bianco, about Keenan. “He’s feeling good. That happens, offensively. You can get hot and you can get a little cold… since then, his at bats and he’s hitting the ball the other way, he’s just been terrific.”

Even Greer Holston got into the action in the seventh with Ole Miss holding an 11-0 lead. Holston, who has struggled this season and entered the game with an ERA of 40.50, threw two scoreless innings, allowing one hit and one walk. The outing brought his ERA down to 16.20. Logan Savell picked up the save, his first of the season.

Next up, the Rebels have a chance to win their thirteenth in a row and break the Bianco Era winning streak record. Gunnar Hoglund will take the mound at 1:30 p.m. on Saturday against the Tigers.

Bases loaded is back! Every Friday (and the rare Thursday), we’ll take a look at four pressing storylines heading into... read more