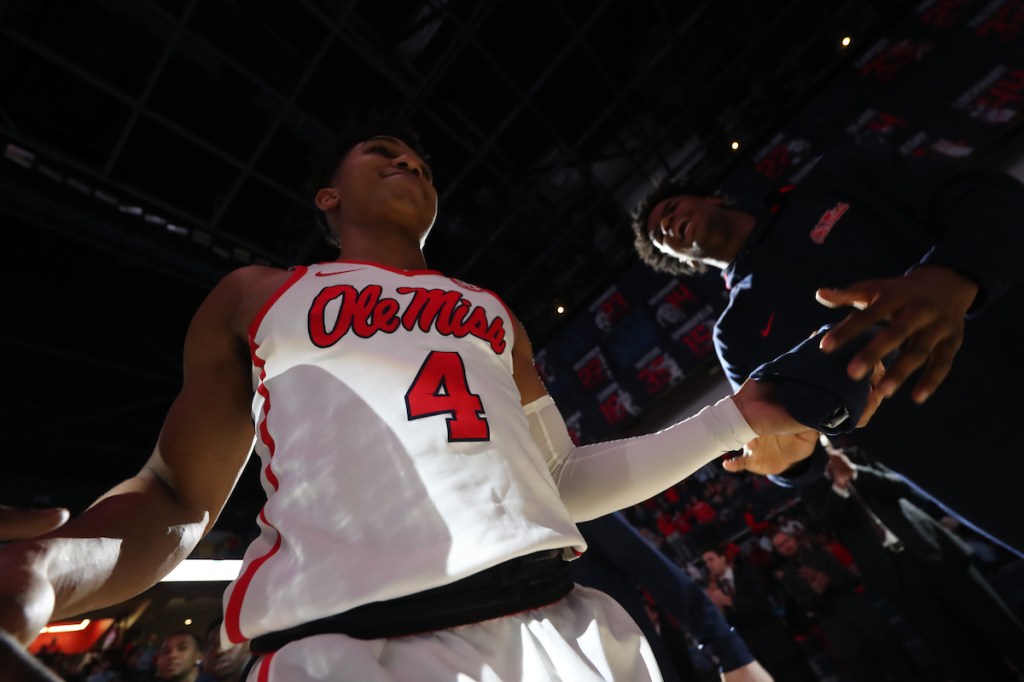 Breein Tyree went for 19 points on an efficient 6 for 9 from the field on his senior night at The Pavilion on Wednesday, March 4, 2020 (Photo via. Ole Miss Athletics)

Barring a miracle run in the SEC Tournament this upcoming week, Ole Miss will not make the 2020 NCAA Tournament.

They know this – but what they also know is that they can end the regular season by potentially delivering a knockout blow to their arch rival’s shots at an at-large bid.

Ole Miss (15-15, 6-11 in the SEC) travels to Mississippi State (19-11, 10-7 in the SEC) on Saturday night for both teams’ final game of the regular season. State, with an NET ranking of 51 and only two quadrant one wins, is firmly on the tournament bubble. The Rebels have one goal: to play spoiler.

“That’s the biggest motivation, just to go down there and win. Mississippi State has always been a game that I get up for, and it means so much to this school. This rivalry means so much to me, to everybody,” senior guard Breein Tyree said. “It’s all love between the players, but when you’re on the court, it can be mean at times.”

Tyree, a New Jersey native, wasn’t always familiar with the rivalry, but said he caught on instantaneously in his first game. Matched up against Lamar Peters at The Pavilion in 2017 during his first rivalry experience, a 88-61 Ole Miss win, Tyree said he has distinct memories of the game, specifically a dunk that put him on SportsCenter for the first time.

All the recent successes aside, the Rebels know the game in February and the last 13 matchups have just about no effect on what will happen on Saturday.

“That’s one of those games that sometimes just happens. We played terrific (the last meeting) and Mississippi State wasn’t at their best,” head coach Kermit Davis said. “We understand this is a rivalry game and that one has no bearing on this one. But our team has a lot of confidence. To me, this is the most fun game on our schedule, when you can go to your arch rival’s building and play. There’s nothing better than that.”

However, the trip to Starkville is something the Rebels haven’t done well.

“It’s been disappointing. Most of my career, that’s what our teams have been known for, toughness and winning on the road. We haven’t done it this year,” Davis said. We’ve had some chances at Auburn, Kentucky, Missouri, Memphis, we’ve had some chances to to close it out and have not done that. It’s going to take a great effort.”

Ole Miss lost those four mentioned road games, three of which would have counted as quadrant one wins, by an average of 4.5 points. If one or two possessions down the stretch go differently, we’re talking about this Rebels team in very different light now in March.

Ole Miss has no more games at home, where they’ve won at a 71-percent clip. They go on the road to Starkville on Saturday, before going to Nashville for the SEC tournament on Wednesday. The Rebels have been better on neutral sites than true road sites, a 2-1 record, but right now, Nashville isn’t really even on the radar for Ole Miss. All eyes are on Starkville and the opportunity to knock the Bulldogs off the bubble.