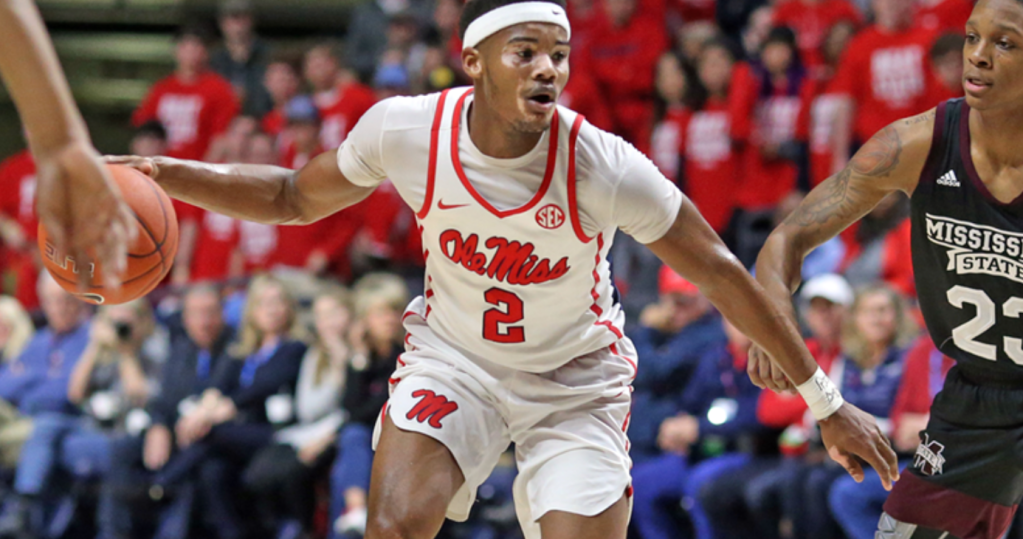 Ole Miss hung right with Mississippi State on Saturday afternoon in Starkville for 14 minutes. A long, arduous Bulldog run to close the first half all but did Ole Miss in, eventually falling in ugly 69-44 fashion to close out their regular season.

The SEC’s leading scorer just couldn’t get going. But the Rebel senior’s backcourt partner kept Ole Miss afloat, at least for the opening 14 minutes. Mississippi State did a great job face guarding Breein Tyree, limiting the Ole Miss senior to only three points in the opening half.  For a while, it was Devontae Shuler keeping Ole Miss hanging around. Shuler scored 11 in the opening half on 5 of 7 from the floor.

However, Shuler did all his damage in that opening 14 minutes. With the game tied at 21 with 7:30 to go, Mississippi State’s Reggie Perry bodied up Blake Hinson, backing down the Rebel sophomore and easily scoring over him to spark what would be an 18-4 run to close the half by the Bulldogs. Ole Miss hit only one shot from the field over the run that gave State a 39-25 lead at the half.

Perry proved to be a problem for Ole Miss all night. The Mississippi State power forward was simply larger than anyone Ole Miss threw at him – from Hinson to Sammy Hunter to KJ Buffen. With Khadim Sy occupied defensively on 6-foot-11, 255-pound Abdul Ado, Perry’s power prevailed nearly every time he tried to back down a Rebel defender. In the first half alone, Perry scored 18 points and grabbed 16 rebounds, shooting a perfect 8 for 8 from the free throw line.

Ole Miss came out in the second half by doubling Perry with both KJ Buffen and Sammy Hunter. Perry still scored. However, for the most part it worked a little better, as for the game Perry finished with 22 points and 14 rebounds.

The second half was essentially as ugly as the first. Whatever Ole Miss offense existed over the opening few minutes of play simply disappeared. Quite honestly, facing a massive deficit on the road, they appeared to give up.

Ole Miss scored only 19 points in the second half, shooting 19-percent from the field and 0 for 8 from three in route to the 69-44 loss.

With the loss, the Rebel 2019-20 regular season comes to an end at 15-16 (6-12 in SEC play). Technically, Ole Miss still has a chance at an NCAA Tournament automatic bid by winning the upcoming SEC Tournament. They’d have to win five games in five days in Nashville to do so. The Rebels will open the SEC Tournament on Wednesday, playing in the 12-13 seed game at 6 p.m. Central Time.