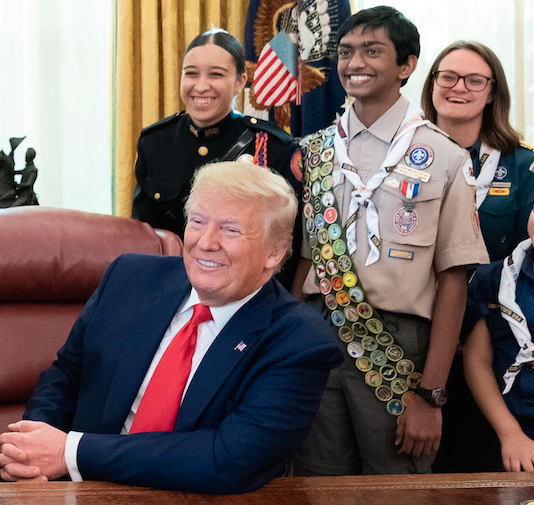 Oxford's Keerthin Kerthikeyan (right) visits with President Donald Trump in the Oval Office at The White House during his trip to Washington, D.C. last week. Kerthikeyan was one of 13 Boy Scouts who presented the Report to the Nation. (Contributed)

An Oxford Eagle Scout spent last week with some of the leaders of the free world as part of an effort to show how Boy Scouts of America are thriving better than ever.

Keerthin Karthikeyan went to Washington, D.C. to help present the Report to the Nation, which recaps the BSA’s previous year. Every year since 1960, the government has required BSA to provide a report as a way to see if boy scouting was still worth federal funding.

Karthikeyan joined 12 other Boy Scouts from across the nation from Feb. 29 through March 6 as they presented their report to President Trump and other congressional leaders. He was the first scout from the Yokna area, or North Mississippi, to be selected to help present the report.

To be considered, a Boy Scout must first be nominated, which for Karthikeyan happened through his science project from last year, where he turned Styrofoam into carbon through various methods. It was an idea he got from Boy Scouts, Karthikeyan said.

Three of the positions were automatically selected while the other 10 spots went through the nomination process.

Included in the report were several accomplishments the BSA had in 2019. There were 61,353 scouts earning the rank of Eagle Scout, which Karthikeyan was one of, and was the largest Eagle Scout class in the history of the BSA. Scouts also put in more than 13 million hours of community service last year.

Once in D.C., the group had to wake up at 5:30 every morning and spent the entire day going around the city and meeting people such as California representative Nancy Pelosi, Mississippi U.S. Senator Trent Kelly and President Donald Trump.

“It was probably the best experience I’ve ever had in my lifetime,” Karthikeyan said. “It was a very strenuous process, I guess, but it was a very fun outing. … We spent the whole day traveling, going to so many different places in D.C. Along with that we met so many high, key officials of the country.”

Every day, the group presented the Report to the Nation to different leaders and groups they met, but the official report, which was presented to Congress and placed in their handbook was given to Secretary of the Senate Julie Adams and Deputy Clerk to the U.S. House of Representatives Robert Reeves on March 4.

Getting to the meet the President of the United States is one thing, but Karthikeyan and his group were able to meet President Trump in the West Wing of The White House inside the Oval Office.

“It was very fancy. It was very nice,” Karthikeyan said. “It was a little bit smaller than I expected, but it was super nice. Then with the Resolute (desk) in front of us, the desk was so intricately designed that it looks so nice.”

Having earned the rank the rank of Eagle Scout, Karthikeyan said he now wants to set his sights on earning his vigil honor of the Order of the Arrow (OA), which is the national honors society for BSA. There are three ranks of honor in the OA: ordeal, brotherhood and vigil. Karthikeyan currently holds the rank of brotherhood.

From there, he has aspirations of becoming the OA national chief and possibly President of the United States.