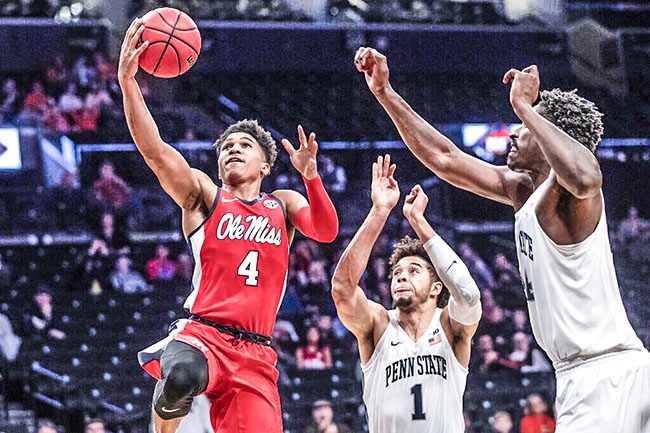 After a regular season in which he averaged 19.7 points per game and 22.2 points in conference play, Ole Miss senior Breein Tyree has been named first team All-SEC for the second consecutive year.

The Southeastern Conference released honors on Tuesday morning, making Tyree just the third Rebel to ever be named All-SEC twice, joining Ansu Sesay and Stefan Moody. Tyree is also only the the third Rebel since the turn of the century to average over 20 points in SEC play for a season.

Tyree has 15 games of 20 or more points this season, including seven games of 25-plus points in conference play. His signature offensive explosion came at home in February, scoring a career-high 40 points against Mississippi State in a 25-point blowout. The 40 was one of four games of 30-plus points on the season. He also ranks second on the team in assists (2.6 per game) and third in steals (1.3 per game).

Moving from the point to the two-guard when Kermit Davis took over as head coach in 2018, Tyree’s offense exploded going into his junior year and picked up yet again as a senior. Tyree jumped from 10.8 points per game as a sophomore to 17.9 as a junior in just one season playing off the ball. This year, he jumped again to 19.7 points per game.

With the conclusion of his regular season Ole Miss career this past weekend, Tyree currently ranks seventh on the Ole Miss all-time scoring list (1,749 points) and sixth in made three-pointers (204).

Tyree has one last chance to add to his career numbers, as Ole Miss travels to the SEC Tournament in Nashville. They play Georgia first, on Wednesday at 6 p.m.