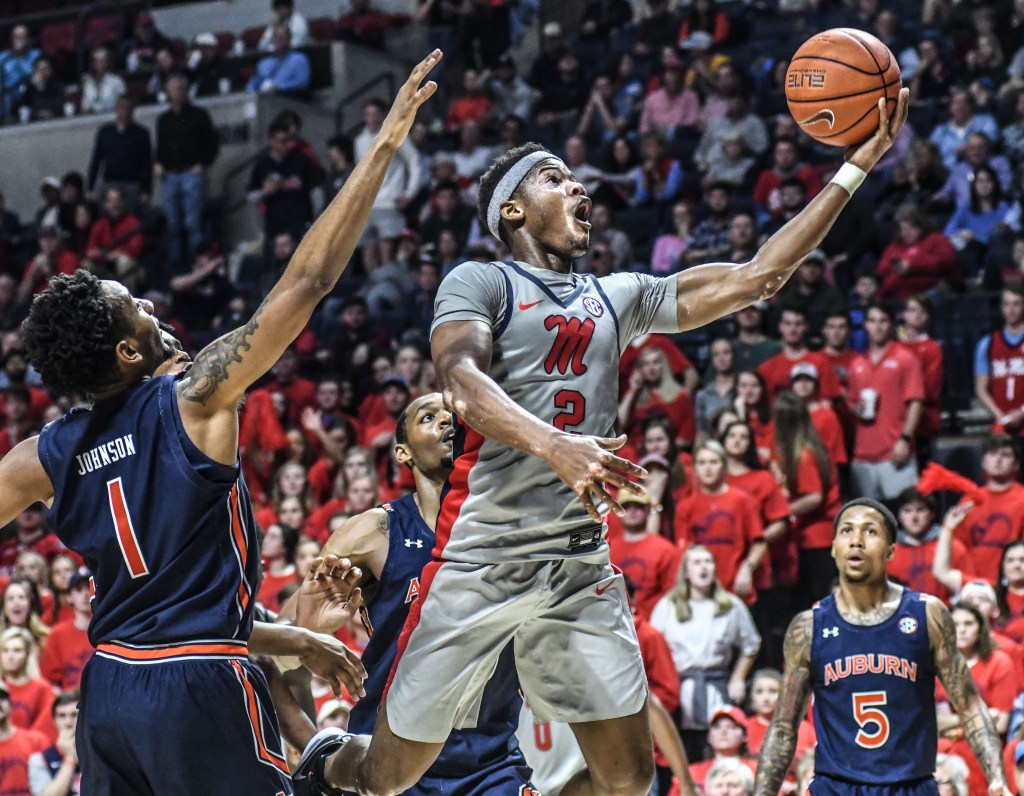 Ole Miss guard Devontae Shuler (2) drives past Auburn guard Jamal Johnson (1) to score at the Pavilion at Ole Miss in Oxford, Miss. on Tuesday, January 28, 2020. The Rebels will begin their home slate of SEC games against the Tigers on Jan. 6, 2021. (Bruce Newman, Oxford Eagle via AP)

Ole Miss has one final shot on the hardwood.

At 12-seed, the Rebel basketball team takes the court for the SEC Tournament opening round on Wednesday night against Georgia. The season hasn’t exactly gone the way fans and the team had hoped. At times, they’ve looked incredible – think of a 25-point blowout of Mississippi State at home – but in other times, especially on the road where they’ve won just a single game, Ole Miss was simply a team that never put the pieces together in the 2019-20 season.

At 6-12 in conference play, the Rebels have zero chance at an at-large bid to the NCAA Tournament. However, like every conference, they could make the tournament by winning the conference tournament. Playing on opening day as one of the bottom four seeds, that would require winning five games in five days.

It’s a lofty, and incredibly unlikely path, but it’s a path that would begin with three games against teams the Rebels have already beat this season: Georgia, Florida and Mississippi State.

“I hear coaches talk all the time about teams like ours and like Georgia, that we just are so competitive. They’re a team just had a tough one at LSU, but they just play hard,” head coach Kermit Davis said. “They have probably the most special talent in our team and maybe in the whole country, with Anthony Edwards. We played him really, really well at Georgia in a hard-fought win in late January. So, I’m just really looking forward to getting to Nashville. I’ve been at it a long time, and this might be as wide-open a field as we’ve ever seen.”

Ole Miss went to Georgia on Jan. 25, winning 70-60. It was their only true road win of the season. In the game, Ole Miss held Anthony Edwards, the Georgia freshman who has a very realistic shot at being the No. 1 overall pick in the 2020 NBA Draft, to 13 points on 3 of 12 shooting. It was arguably Ole Miss’s best defensive performance of the entire season.

The last Rebel stand starts with the Bulldogs. But ultimately, if this team doesn’t play better than they had all season, they have almost no chance at running the table. Even if they take it to another level, five games in five days is a brutally daunting task.

After making the NCAA Tournament one year ago in Davis’s first year with the program, the bar was set high coming into 2019. Breein Tyree was back for his senior season after being named first team All-SEC as a junior, but it’s likely the loss of Terence Davis to the NBA was over looked.

Tyree has been as good as ever, and has a great chance of being All-SEC yet again, but Ole Miss never really found ways to replace Terrence Davis’s production. Freshmen haven’t stepped up and returning players other than Tyree didn’t make all that noticeable of improvements, leading the Rebels to be in the position they’re in now.

“We were picked eighth or ninth, so it’s not like we were favored to win it, and we lost a really good player. I just think, like a lot of these teams, we haven’t found an ability to close games out and close games out on the road,” Kermit Davis said. “We have some freshmen that I still think are going to be really good players, that weren’t really ready to impact high-level games in the non-conference and obviously high-level SEC games. That said, I think we’re five or six possessions away from being in the same position we were in last year.”

It may not have been the storybook regular season, but the Rebels still have a chance. That all starts on Wednesday night in Nashville.