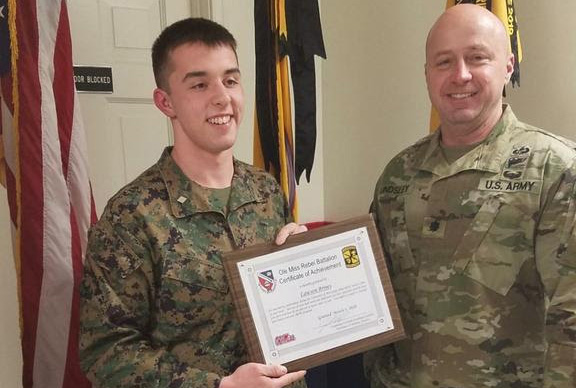 Lawson Brines has only known two things his whole life: wanting to serve his country and to study the art of Jiu-Jitsu.

One of those things has helped him achieve the highest honor a member of the Mississippi Junior Reserves Officers Training Corps (MJROTC) can earn. Brines was named the Cadet of the Year for Mississippi earlier this month.

A senior at Oxford High School, Brines completed four years in the MJROTC and will be attending Ole Miss this fall to participate in Army JROTC on scholarship. He is the son of Warner and Maria Brines.

Before Brines began his journey to enter the armed forces, he began studying the martial art of Jiu-Jitsu when he was 13 years old. A year later, he started JROTC. He is an undefeated professional grappler and trains six days a week and hopes to run a Jiu-Jitsu academy of his own one day.

“Doing Jiu-Jitsu and serving the country are really the only two things I have ever wanted to do with my life,” Brines said. “In ROTC, I learned the leadership principles that I apply everywhere else.”

“They both taught me a lot about my personal leadership style and helped me see a bigger picture,” Brines said of his former instructors.

During the 2018-19 school year, OHS went through a short period of time without an ROTC instructor. The program relied on the leadership and skills of upperclassmen, such as Brines, and school leadership to keep the program going forward. In January, the school district named Captain Gary Baxter as its new ROTC instructor. Baxter is a retired member of the United States Marine Corps.

“I have really worked hard to get to where I am, but I want to make it clear, I did not run this program, we all did,” Brines said. “I wouldn’t be anything without the rest of these cadets.

After completing four years of Army ROTC at Ole Miss, Brines will enter the Army as a Second Lieutenant and aims to be an Army Infantry Officer and eventually an Army Green Beret.

An Oxford man is facing domestic violence charges stemming from an incident last month. On Feb. 29, officers with the... read more