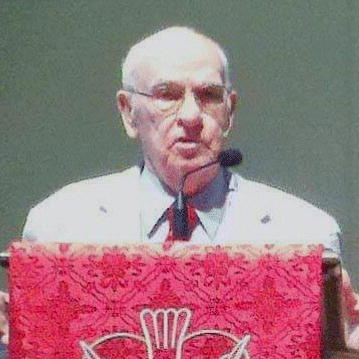 The Rev. Lavelle Woodrick, 89, a retired United Methodist pastor, died Monday, March 9, 2020, at the Laney House on the campus of Traceway Retirement Community in Tupelo, Miss.

Visitation is scheduled for 12-2 p.m. on Thursday, March 12, 2020, at First United Methodist Church in Philadelphia followed by funeral services at the church. The Revs. John Moore and Chris Young will officiate. McLain-Hays Funeral Home and Holland Funeral Directors and will handle arrangements.

A graduate of Millsaps College and Candler School of Theology at Emory University, Rev. Woodrick began his ministry in 1954 at Lovely Lane Methodist Church in Natchez. From there he served at Jackson Capitol Street UMC, the Sturgis Charge, Tupelo St. Luke UMC, Greenwood St. John UMC, Oxford-University UMC, and two appointments to First United Methodist Church of New Albany. Between appointments in New Albany, he served as the superintendent of the Starkville District. After retiring to Philadelphia, he returned to Sturgis UMC, retired again, and then served the Cleveland Charge in Kemper County. During his tenure in Oxford, Rev. Woodrick became good friends with Dr. Porter Fortune, then the chancellor at Ole Miss. It was not uncommon for them to exchange questions of historical trivia that often wound up with university faculty scrambling to find the answers. Examples include the location of Dancing Rabbit Creek and exactly what is a Nittany, as the in the Nittany mountains in Pennsylvania and Nittany Lions of Penn State.

While in New Albany, Rev. Woodrick resumed playing the trumpet, which he began in high school and studied the trumpet under Charles Gates at Ole Miss. He was also a sports fan, especially of baseball. He enjoyed watching the Ole Miss Rebels play at University Park and hearing the heckling directed at opposing players and umpires. When an SEC championship slipped away from the Rebels just one strike away from victory, he was so incredulous that he mentioned it in his sermon the next day.

Memorials can be sent to Candler School of Theology, Office of Advancement and Alumni Engagement, 1531 Dickey Drive, Atlanta, GA 30322 or can be made online at www.candler.emory.edu/give.

Candace Sue Gambrell, 70, passed away Tuesday, March 3, 2020, at her residence in Taylor, Miss., surrounded by her beloved... read more