Decisions have been made: where do we go from here? 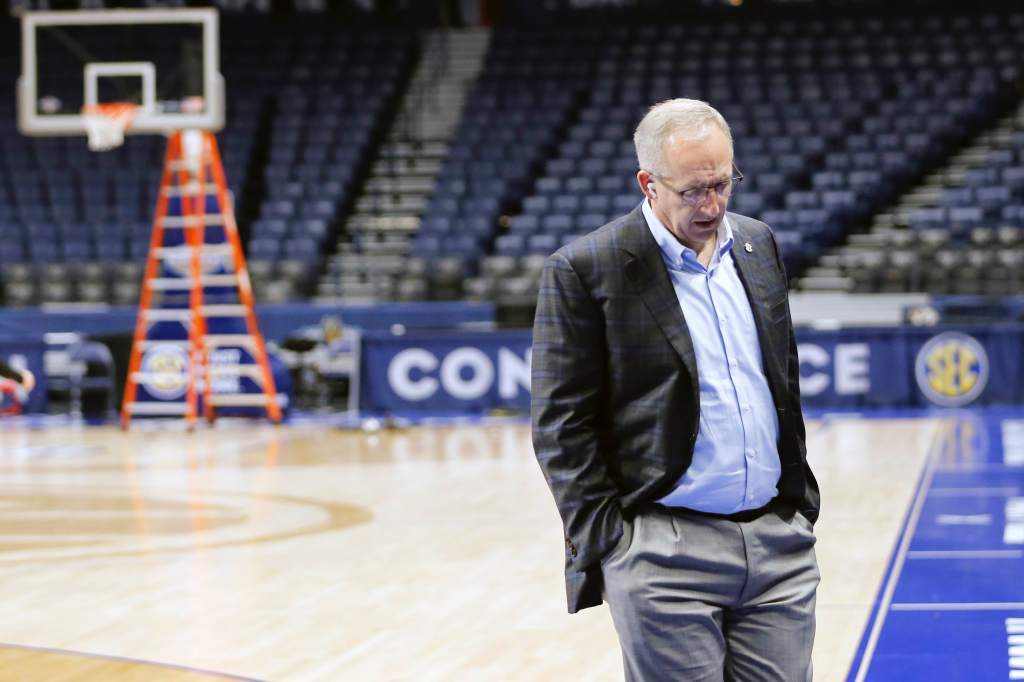 Greg Sankey, commissioner of the Southeastern Conference, walks across the basketball court as the venue is dismantled after the remaining games in the NCAA basketball Southeastern Conference Tournament were canceled Thursday, March 12, 2020, in Nashville, Tenn. The tournament was canceled Thursday due to coronavirus concerns. (AP Photo/Mark Humphrey)

How many moments in your life do you honestly, truly remember in vivid detail, almost as if everything is happening around you in slow motion?

It’s probably not many.

There are a few universal moments that we share, depending on age. Everyone up to a certain age remembers 9/11. You remember where you were when you found out, who you were with as you turned the television on and how everyone around you reacted. I’m now 25 years old, and this was the first of those moments for me.

I’m sure a lot of you older than me have similar memories of the Watergate Scandal or the Oklahoma City bombings or Columbine. Like a lot of kids in college now were when 9/11 happened, I was alive when the OKC bombings and Columbine occurred, but I was too young to have memories of them.

There’s no rational reason as to why I remember Jackson’s death so vividly. I was in high school and wouldn’t describe myself as a Michael Jackson fan, but it is what it is. When I found out the Kobe news in January, I was sitting at a restaurant called Vendetta’s in Veil, Colo., a corner table right below the television. I first saw the news break on Twitter. It felt surreal. I could tell when others around the room saw what was happening, slowly trickling. When the TV above us eventually cut away to the news, and everyone saw the events unfold, you could feel the mood in the entire restaurant darken like a dark cloud enveloping a room. It’s a day I’ll never forget.

I only bring all of these depressing moments up to think about where we are now. There’s a very good chance that I’ll be adding a fourth item to that list – the 48 hours that COVID-19 went from something we make off-hand jokes about to a serious threat that’s legitimately shutting down a large portion of society and essentially the entire sports world.

It’s a strange feeling. On Wednesday night, hours after the SEC had announced they’d close events from public attendance and the NBA suspended all operations after a player tested positive, I was just laying on the cold wood floor of a friend’s apartment. At that point, we knew things were serious; we knew the world was going to change. But at the same time the innate impact was only to laugh a little bit: what the hell was going on?

Now, there are no sports for the foreseeable future. Events that happened Wednesday morning feel like they happened a week ago. On Friday night, I wouldn’t be making the short trip to Swayze Field to open SEC play. On Sunday, there will be no NCAA Tournament selection show.

Selfishly, I wonder what I’m going to do. Sure, it’ll be weird to not have an NCAA Tournament in a week, to not have the Masters in a month. But also, what am I going to write about in 10 days when there’s no sports happening?

But when you think of all that’s transpired in the sports world in a historical context, things get even weirder.

The NCAA held its first men’s basketball tournament in 1939. It began as an eight-team competition, slowly expanding to 64 teams in 2001 and 68 by 2011, its current format. 2020 will be the first year in the history of the tournament that a victor will not be crowned. Take a minute to think about that.

The United States entered World War II in December of 1941. From 1942 to 1945, when the world was at war, the NCAA crowned Stanford, Wyoming, Utah and Oklahoma A&M as champions. Four champions were crowned in the middle of a World War, and in 2020 there will be no tournament, no victor and a massive gap in the history books. The NFL and MLB also competed, albeit at altered levels, and named champions in these years.

Context in no way makes the NCAA’s decision wrong. Doing everything we can to prevent the spread of a worldwide health crisis is the right thing to do. It’s just wild to think about it in historical context.

For now, we’re left without our best escapism. Theoretically, we might have sports a month from now. Ole Miss could, in theory, play a midweek baseball game against Southern Miss on March 31 in Pearl. Would I bet on this happening? Absolutely not. Given the option, I would do the exact opposite.

There’s going to be a lot of time on our hands in coming weeks. We’ll probably do a lot more reading as a society. Maybe at some point in that 10-day span when we run out of sports content, I’ll write about my favorite and most intelligent sports books. There will be more Netflix binges and more weird conversations, where the thought of ‘Wait, should we not go out to dinner?’ happens.

At least until we figure this out, just do the right thing. I’m a 25-year-old healthy male. I might get COVID-19, but I’m certainly not going to die. However, I could theoretically infect someone else who is at more of a risk than I. So do the right thing. Stay home if you’re sick and do what you can to not get others, especially your older friends and relatives and any immunocompromised people, sick. But at the same time, remember basic compassion and humanity. In the long run, everything will be okay.

A timeline of COVID-19’s impact on the sports world