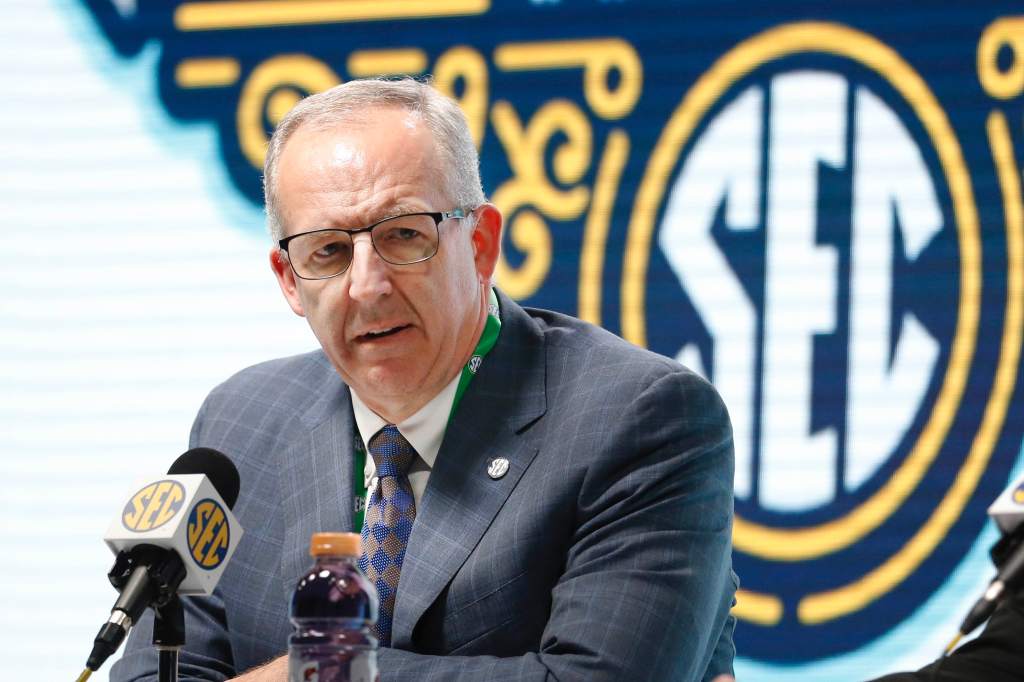 Southeastern Conference Commissioner Greg Sankey announces Wednesday, March 11, 2020, that fans will not be allowed in the arena to watch NCAA college basketball games in the SEC tournament in Nashville, Tenn., starting Thursday. The Southeastern Conference joined the rest of the Power Five leagues and announced that only family and essential personnel would attend its men's and women's tournament basketball games. (AP Photo/Mark Humphrey)

One day after declaring all athletic activities within the Southeastern Conference will cease until March 30 due to threat of COVID-19, the SEC has pushed back the potential restart date yet again on Friday.

In a statement made from the conference on Friday afternoon, the conference has pushed the potential restart date to April 15. Teams will not be allowed to practice until that point.  The delays will postpone all events, including baseball, softball, spring football and the Grove Bowl, among others.

“The SEC today announced that all organized team activities, including competitions, team and individual practices, meetings and other organized gatherings, will be suspended through Apr. 15,” the conference said in a statement on Twitter. “SEC member institutions will continue to provide their student-athletes with care and support to meet needs in areas including academics, medical care, mental health and wellness, nutrition and housing as needed.”

The decision comes after the NCAA suspended all recruiting, both on and off campuses, to the same April 15 date earlier on Friday. Additionally, President Donald Trump recently declared on Friday afternoon a National State of Emergency.

Additionally on Friday, the NCAA announced that it will grant an extra year of eligibility to those in spring sports, sports whose championships were cancelled on Thursday by the organization. They are still discussing how to handle that issue of eligibility with winter sports.

The decision to push the theoretical restart date back to April 15 should not come as a surprise. In a press conference on Thursday, SEC commissioner Greg Sankey admitted that such a move was possible, even in the wake of the initial March 30 deadline.

“We have a March 30 date. The majority of our spring sports operate beyond that date,” Sankey said. “We’ve created this as an interim period where we will work with our campuses to determine how we will return to our normal operation. It may not be March 30.”

Right now, everything is in a holding pattern. Will sports actually resume on April 15? Only time will tell.

Decisions have been made: where do we go from…