COLUMN: NFL offseason providing a modicum of normalcy amongst unrest 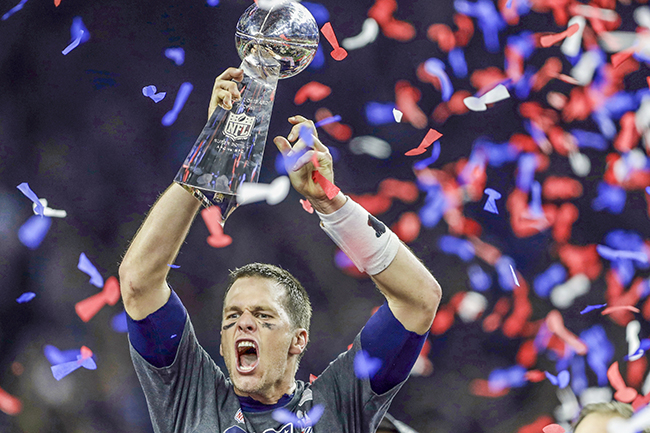 It’s going to be incredibly bizarre to see Tom Brady in a uniform without that clunky Patriots logo on the helmet.

On any standard mid-March Tuesday of the past, Brady’s decision would be front page news (maybe not in Oxford, but nationally). In these weird times, it sort of faded already. Yet, like Bruce Willis taking a long drag of a cigarette in the midst of a Die Hard terrorist threat, Brady’s making a free agency decision in the midst of this chaos the only sense of normalcy we really have.

With the NCAA tournament shutting doors and the SEC seemingly getting closer and closer to punting the entire sports schedule, the NFL moved forward as normal on Monday with the start of the league new year. The NFL isn’t playing games, and they cancelled public events in Las Vegas ahead of next month’s draft.

However, free agency and standard early offseason operations can happen in small groups or behind closed doors – and the league moved forward as planned on Monday. Between the opening of the legal tampering period on Monday, and the time of publication, 66 different transactions happened across the league, including three major trades involving legitimate superstars.

The Carolina Panthers – my personal favorite – publicly announced they’re trying to trade Cam Newton. For about three hours on Tuesday morning, I had to struggle with the fact that Brady to Carolina was a possibility.

I grew up in a San Francisco 49ers household, thanks to my dad. Above the couch in our basement for as long as I can remember hung an autographed Joe Montana jersey – he was the GOAT, it was undisputed and sacrilegious to question it under my father’s roof. That jersey now hangs like a monument in my bedroom, on a wall adjacent to a black-and-white painting of the Christian Laettner shot in 1992 to beat Kentucky.

I remember the moment I finally accepted that Brady, not Montana, was the best quarterback of all time – sitting at a bar in San Francisco, ironically, during their 28-3 comeback in the Super Bowl. I remember having the conversation with my dad that Brady is actually better than Montana, finally admitting it despite my vitriol for the Patriots. Was I really going to root for that guy in Carolina?

We now know that Brady will not be in Carolina, as they signed Teddy Bridgewater to a three-year deal. So that brief thought quickly dissipated.

But here’s the point. I made it 486 words into a sports story without writing the words ‘Coronavirus’ or ‘COVID-19.’ On this Tuesday morning, writing from home of course, I watched nearly all of Get Up in the background on ESPN and now SportsCenter is on. It’s been a few hours now since I’ve seen them even mention the viral threat sweeping the globe.

In no way am I suggesting ignoring news about coronavirus. Knowing what’s happening – both locally, nationally and globally – on a day-to-day basis is as important as it’s literally ever been. I’m just a weird 25-year-old sports writer with a molecular and cellular biology degree. I’m as curious and fascinated and nervous about this threat as anyone.

It’s still good to have an escape. There’s no NCAA Tournament starting on Thursday, no SEC baseball, no 2020 Masters Tournament and honestly no live sports for a very long time. For a lot of us, those events are our escape from the toils and tribulations of daily life and in a time like now, you’d think we need them as much as anything. I mean come on, some online sportsbooks are offering the ability to gamble on the weather. Seriously.

So for now, the NFL offseason is all we have on the sports front. Through just a day and-a-half, it’s actually provided quite a bit of drama. DeAndre Hopkins and Stefon Diggs have been traded, and Amari Cooper got paid like a superstar. Cam Newton and Tom Brady will be wearing different uniforms at the start of 2020. It’s weird. But in one of the most surreal and unexpected times in over a decade, the NFL offseason is the closest thing we have to a modicum of normalcy.