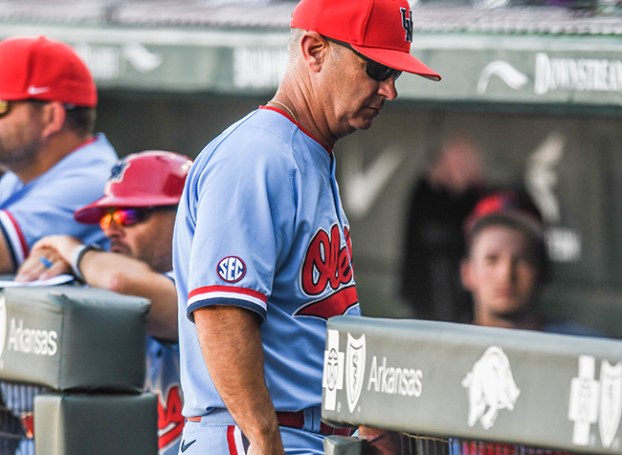 Ole Miss head coach Mike Bianco walks back into the dugout following a visit to the mound against Arkansas in an NCAA Super Regional at Baum-Walker Stadium in Fayetteville, Ark. on Monday, June 10, 2019. (Bruce Newman, Oxford Eagle via AP)

Mike Bianco: “We’ll never be able to put that team back together”

Mike Bianco had many more text messages than usual when he got to his phone around 7 p.m. last Wednesday evening.

Ole Miss had just demolished UL Monroe 18-7 on the road, winning their 16th-straight game, one shy of a program record. But the season was about to change forever.

Over the course of that ULM game, the NCAA had announced that they would be playing the impending NCAA men’s and women’s baseball tournament would be held without fans. Regardless, the Ole Miss team loaded busses as normal and headed back to Oxford. Bianco had a teleconference with Keith Carter and other coaches at 8:30 p.m. that night.

“When you talk about things really moving rapidly, that’s when our lives really sped up,” Bianco said.

At that time, Bianco was informed of the Southeastern Conference’s decision to play the upcoming weekend, the team’s SEC opener against LSU, without fans in attendance. During that same bus ride, with players refreshing Twitter, the team would find out that NBA All-Star Rudy Gobert had tested positive for COVID-19 and the NBA was suspending all operations.

Nevertheless, with the world spinning around them, the team was back in their facilities in Oxford the next morning around 10:30 a.m. That’s when they found out the SEC was suspending all play until March 30 and canceling the remainder of the men’s basketball tournament. It was shocking news, but they took the practice field regardless – staying in game-ready shape until the 30th came along.

Later that afternoon, Bianco was on a treadmill in the facilities with the rest of the team in the weight room. Watching ESPN as he worked out, Bianco saw the news that the NCAA had cancelled all of the spring championships. The organization had dropped an anvil on the Rebels’ Omaha dream.

“They’re all in shock. It’s the third time in less than 24 hours that they’re getting different information, and now the College World Series has been canceled,” Bianco said. “It was very emotional, as you can imagine. I’m crying; they’re crying. There’s no questions, just devastation.”

When asked how to put this season in any sort of perspective, Bianco simply says he can’t.

The Rebels went 16-1 in 2020, losing opening night to No. 1 Louisville before rattling off 16-straight wins, one shy of a program record set in 1960. A team that went unranked in some preseason polls was ranked top 10 in every poll and was, undisputedly, the hottest team in the nation.

When the SEC slammed the door on the season, the Rebels were No. 4 in RPI and had eight quadrant one wins to just one loss – Oklahoma is the only team with more quadrant one wins at 9-2 in those games. Ole Miss had the nation’s third-best scoring offense, and led the nation in home runs.

Six Rebels had an on-base percentage north of .400, led by Anthony Servideo and Tyler Keenan’s preposterous slash lines of .390/.575/.695 and .403/.529/.791. Doug Nikhazy and Gunnar Hoglund were becoming an elite one-two pitching punch, and Derek Diamond was as good as one could possibly expect from a freshman starting on the weekend.

Simply put, this Rebel team should be competing not just for a national seed and the opportunity to host a Super Regional; they were a very, very serious national championship threat.

“Obviously, there’s disappointment. It’s a very emotional time for them, and I don’t think they even know what to think,” Bianco said. “You hear about national disasters and those things where time stops. I think that’s how we all feel right now. … But really, I just feel for the kids. We’ll never be able to put that team back together. Regardless of the NCAA and how they decide to excuse the year of eligibility, there will be kids that leave because of eligibility and teams that leave because of the draft. It’s natural.”

Bianco is right. This unit won’t be together as a whole next year. The NCAA has said it will grant an extra year of eligibility for some or all spring sport athletes. How that will work is yet to be determined, and will be very complicated as far as baseball is concerned. These players are on an equivalency scholarship, not a full scholarship. There are roster limits and scholarship limits teams are set to for a given year, something the NCAA will have to figure out before granting extra eligibility.

That’s not even counting the draft-eligible juniors that will likely leave. Many of the top Rebels – think Anthony Servideo, Tyler Keenan, or Max Cioffi – are juniors who could very easily leave in the draft. If past history is any guiding force, very few of those guys will be back a year from now.

Right now, nearly all of the Rebels are back at home. The Bianco family got their own children back from Louisville and Baton Rouge late on Monday night.

The future is uncertain and there are a lot of questions. There’s certainly a lot of “what-ifs” regarding this team in 2020. There will always be an asterisk in the record book next to the 16-1 season.

But right now, in the words of the Rebel Number 5, this is just bigger than baseball.

“Since I was told to send them home last Friday, so much has changed,” Bianco said. “This is so much bigger than baseball or college athletics. This is something that we’ll remember the rest of our lives, this moment and this time when all of this happened. The biggest thing is for us to press the break and pause a little bit and just stay safe.”

Whatever decisions local government and school officials make in the coming weeks regarding the coronavirus outbreak, the Oxford Parks Commission... read more