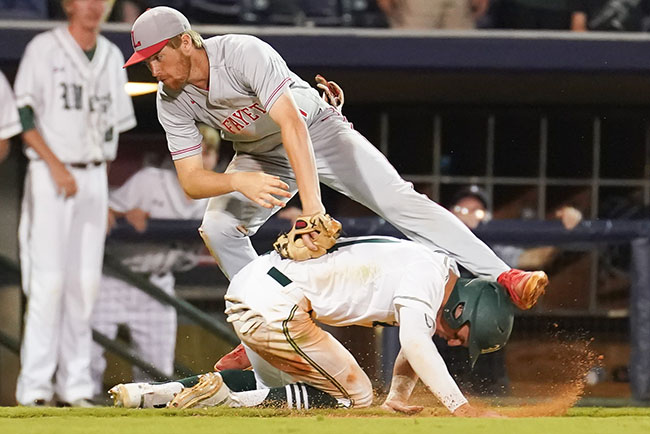 This period of uncertainty has seemingly hit high school seniors harder than anyone. Colleges will be granting an extra year of eligibility for athletes, but for high schoolers, many may have unknowingly played their final games. Over the next handful of days and weeks, the EAGLE is speaking to senior athletes about where their heads are at in these times where so much is unknown. First up: the Lafayette High School baseball team.

Hunter Coleman can’t remember the last time he fielded ground balls without a field and without a baseball.

With school suspended and the Lafayette senior therefore unable to access team facilities and practice with his team, Coleman said he’s turned to a few little league measures – some things he used to do as a young child. He’s practicing his fielding by throwing a tennis ball against a brick wall on the side of his house.

“I’ve gone to the cage on my own and hit a little bit. Then I’ve just kind of done some old stuff I used to do when I was a kid,” Coleman said. “It almost reminds me of little league. It’s rough, but we’re doing the best we can.”

Coleman is one of a handful of Commodore seniors who may very well have played their final game. The MHSAA, abiding by state recommendations and regulations for public schools, pushed the potential start date for athletics back last Friday to April 17.

These seniors are trying to remain optimistic for a potential return on that date or some later date, something coach John Walker keeps reminding them, but they’re realistic when it comes to the scenario sweeping the nation and the globe at this time.

“It’s heartbreaking. For a lot of us, it’s our last chance to play baseball, and we’ve all been playing this since we were little. It’s really tough,” fellow senior Connor Rucker said. “Whenever they gave us a week off school, I was pretty upset. Just thinking, ‘Dang, they’re taking away from our senior year.’ That’s when I knew it was real. I just didn’t really know what to do.”

In the first few days without school, a bunch of the guys were getting together and working out: some throwing, some hitting and even a little bullpen work. One member of the team had access to an indoor practice facility, so they’d go there. Now, as people have taken stronger isolation measures, everyone is kind of on their own.

“These weeks have been so strange. Nobody thought this would happen. We really thought, these seniors, that this would be a really good year,” Coleman said. “Some of our guys are playing their last games here. Heck, some of them may have already played their last games here. That hasn’t really set in yet. But when it does, that’s going to be rough.”

Rucker echoed the statements of his senior teammate, adding that he’s “trying his best not to be a pessimist,” but admitted that it’s tough at times.

Walker, maybe the leader of that optimistic crew, even if futilely-so, crowd sent the boys a text message on Monday: “I miss you all and love you all.” He’s just doing his best to make sure they stay in shape, he said, just in case the season ever does pick back up, be that on April 17 or later.

It’s not exactly the easiest mental state for a 17- or 18-year-old to wrap their minds around. But like everything else in life right now, uncertainty has been just about the only daily form of certainty.

“Every day, I just think that they’re going to keep pushing the season back until past graduation and that it’ll be canceled,” Coleman said. “But in the back of my mind, and hopefully the back of everybody’s mind, we’re hoping this is the last time it’ll be pushed back and we’ll get to start playing again.”