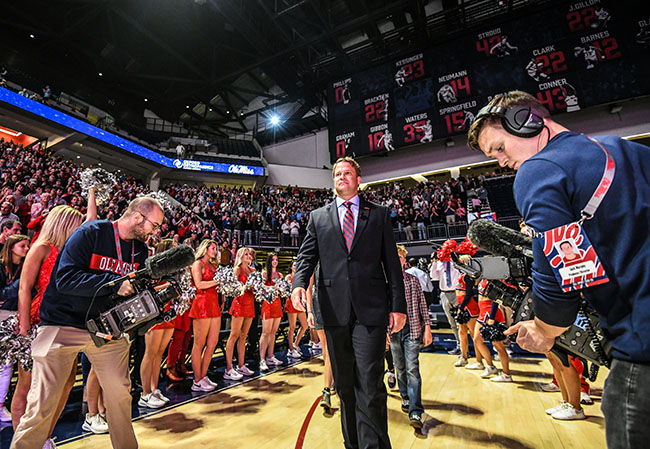 Theoretically, there’s still a chance at some semblance of a spring football practice schedule, but no one seems to think that is likely. Ole Miss is in a football holding pattern, just like Americans are in a holding pattern for just about every form of life across the nation.

Every program across the nation is going to be affected and hurt by the cancelation of spring football practices. But specifically, these changes are going to hurt Ole Miss and other similar programs working under a new coaching staff worse.

“It really hurts first-year coaching staffs and programs. If I were still at FAU, it wouldn’t be that big of a deal,” Ole Miss head coach Lane Kiffin said in a Tuesday teleconference. “You have returning players that know your system and have played games together. It sort of evens the playing field, but for newer coaches it’s not equal at all. If we have no spring, it’s definitely going to hurt first-year programs a lot more than the programs with continuity.”

Ole Miss doesn’t know who their starting quarterback will be. The coaches hardly know their players right now, and a period in which the team should be two weeks into spring football by now just essentially vanished into the aether.

Sure, this is going to hurt installs. Players have the playbook and team-issued iPads with notes and plays, but they’ve never actually gotten to execute these plays with Kiffin and their new coaching staff.

Beyond technicalities of a new system and installations, the coaches are going to be behind on simply knowing the best way to coach this team.

“One of the big things in coaching is just understanding your players and knowing how to coach them,” Kiffin said. “Until you get on the field with them, you don’t really understand that. There’s no way to figure that out from a classroom. So, we’ll loose a lot of things, and you’ll lose them getting to know each other, too.”

The team is still optimistic they’ll be able to get in some semblance of spring football. Kiffin half-joked that the thought may make him simply naïve about the state of the world and how bad this will get.

Right now, the coaching staff can text or call players. They can send out workouts, but the players aren’t required to do them and technically can’t even report back to the coaching staff on progress, or lack thereof. Even for those players in Oxford, coaches can’t train them and the facilities on campus are closed. They’re essentially limited to text messages, and that goes for recruiting as well.

Per NCAA restrictions during this time, teams cannot visit any recruits off campus and can’t bring any recruits on campus for any sort of visits. Coaching staffs can make calls and there’s certainly an emphasis on maintaining an active line of communication, but even recruiting has slowed to a halt.

More than likely, spring will get cut altogether. How the NCAA or SEC evaluates how to make up for the lost time is the big unknown. The leagues have mentioned additional practice time during the summer or fall camp periods to make up for the lost time in the spring. However, it’s going to be impossible to replace things like the Grove Bowl from both a competitive angle and a recruiting angle – Ole Miss was planning the weekend as their big spring visit weekend.

Teams will likely get additional practice time in summer relief, but how they will do that isn’t exactly known yet. Those decisions are being held until the virus sweeping the nation starts to settle down and Americans return to a more normal way of life.

“This is just my speculation, but maybe we do things more like the NFL model,” Kiffin said. “We do not as much contact at practice, or maybe it’s helmets-only. You get closer to the season, but it’s still getting some on-field work with the kids.”

Kiffin said the assumption that no one really knows when this crisis will end has led to the league not making these additional decisions about summer practices at this point, but that it’s something that will “definitely” happen in some form or another.

This new Ole Miss staff can call and recruit virtually. They can talk to their players, but can’t have any real meetings or requirements for the players. For now, they really have no clue when they’ll get their hands on a team they’ve never gotten to see live to this point. For a new program, this waiting period hits even harder and more detrimentally.