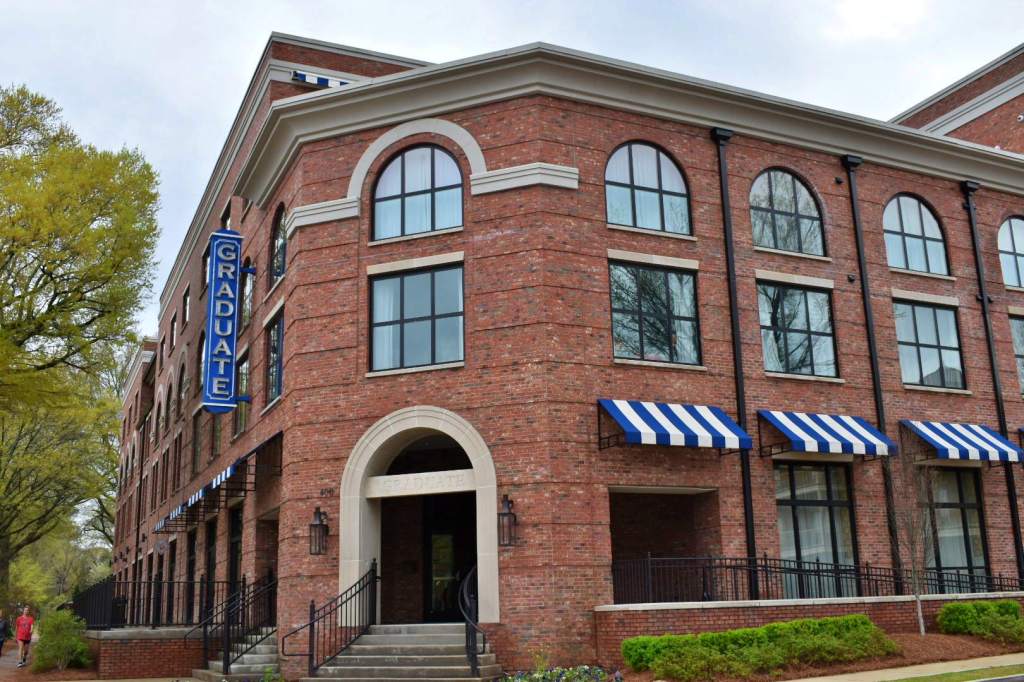 The Graudate Hotel is reopening their rooftop bar 'The Coop' on May 27 and will reopen their hotel on June 15. All Graduate Hotel locations closed doors indefinitely on March 20 due to the COVID-19 pandemic. (Photo by Nathanael Gabler)

The Graduate Hotel was one of the first to completely close their doors, and for now, they’re one of just two to do so.

Effective as of this past Friday, March 20, The Graduate Hotel on North Lamar Boulevard shut down amid the outbreak of coronavirus. One of a chain of 26 hotels around the nation residing in major college towns, all Graduate hotels are now shut down.

They were the first in a line of hotels around Oxford becoming more flexible amid this viral outbreak; however, many other hotels are open as usual – they’re just struggling from a business end, like many other local businesses.

“We care deeply for the safety of the towns we call home and wish to do our part in combatting the spread of COVID-19. To that effect, we have decided to temporarily close all Graduate Hotel locations,” the Graduate’s statements read. “When will we re-open? Short answer – we don’t know. We will continue to work closely with local government and health officials to monitor and assess this situation, and we look forward to serving all our Graduate communities in the near future.”

Simply put, not operating a business is bad for business. However, so are all of the other measures – albeit necessary measures – taken by national, state and local governments to combat the spread of coronavirus.

Locally, postponement of the Ole Miss 2020 Commencement and the 2020 Double Decker Arts Festival have hit the hardest. Every hotel successfully contacted for this story specifically mentioned the two events as a significant loss of revenue.

“Every day we’re getting cancellations. It’s graduation weekend and Double Decker weekend, all canceled. And we already had all the baseball weekends canceled, so that was more reservations,” a spokesman from the Oxford Super 8 said. “Business has been slow, really slow. It’s really hurting us. We’re not renting hardly any rooms, and not as many as we were supposed to. It’s slow.”

The Super 8 in Oxford is one of many hotels in the area that are staying open during this crisis. They’re taking extra sanitary measures while cleaning rooms and have stopped serving breakfast, but they will remain open.

These general measures, remaining open during these times but adding extra precautions, have been taken by nearly all national hotel brands, including Marriott and IHG-owned properties in Oxford. The Chancellor’s House is operating under similar policy – their hotel business is remaining open; however, they’ve temporarily shut down all parts of their food service operation.

Every hotel contacted said they are being generous and flexible with deposits and cancellations, many of these national brands allowing full cancellation without any charge.

For now, the only hotels or motels that have completely closed their doors are The Graduate and The Inn at Ole Miss. The Graduate has no set date for returning to operation of both their hotel and restaurant. The Inn At Ole Miss originally closed their doors with a plan to re-open on Monday, March 23. On that date, they backed their closure all the way up to April 30.