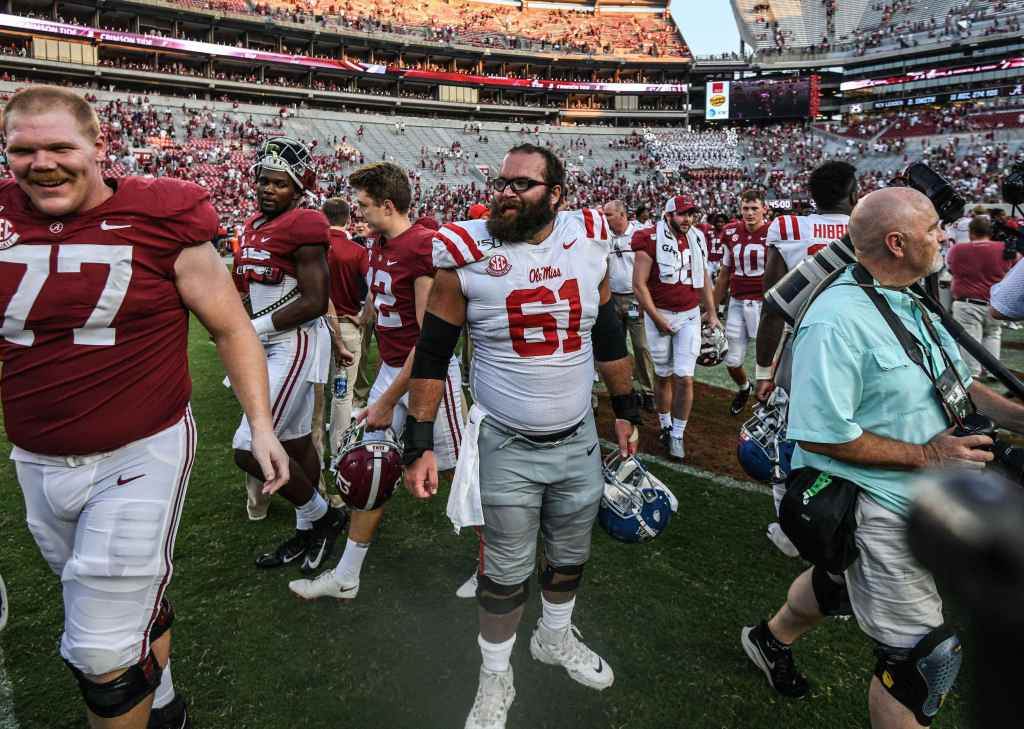 Mississippi center Eli Johnson (61) against Alabama at Bryant-Denny Stadium in Tuscaloosa, Ala. on Saturday, September 28, 2019. Alabama won 59-31. Johnson opted out of the 2020 season on Sunday night, saying he will be focusing on wrapping up his Masters degree in December. (Bruce Newman, Oxford Eagle via AP)

Coronavirus has drilled itself deep into everyone’s life, but no one in Lafayette County has been more impacted by the viral outbreak than Ole Miss and former Lafayette High offensive lineman Eli Johnson.

Johnson was supposed to be in Asia over spring break.

The coronavirus outbreak, originating in China in the later part of 2019, put a halt on those plans. Little did he know how close it would later hit to home.

Johnson’s father has been diagnosed with COVID-19, as has his mother. Still living under the same roof as his mother, who’s exhibiting mild symptoms, Johnson said he is living life under the assumption that he, too, has been infected with the virus.

“With me having been around them so much, the general thought is that I probably have it at this point,” Johnson said. “But since I haven’t shown any symptoms, the team doctors don’t think it’s worth me getting tested, because I could give it to someone else.”

David Johnson, Eli’s dad, was hospitalized on Friday, March 20, amid symptoms of the virus. The 48-year-old sportswriter for 247Sports was running a high fever – the family simply thought they might as well go get it checked out.

After testing negative for both the normal flu and strep throat, David was later tested for coronavirus. Tested on Friday, the results came back positive on Sunday, and David has yet to leave Baptist Memorial Hospital in Oxford. According to his son, he’s not getting any worse, but he’s still a long way away from being fully healed.

“We don’t really have any idea how he got it, but his case hit really quick. He started showing symptoms on that Friday, and it was really strong,” Eli said. “He was running a strong fever and had all these other bad symptoms, so eventually they tested him for the coronavirus.”

Eli’s mother, Ashley, started running a fever on Monday. By Tuesday, doctors had confirmed her as a positive case as well. Ashley’s case and symptoms are much milder, and she is remaining isolated at home as opposed to staying in the hospital, but is still living under the same roof as Eli and his 5-year-old sister while having the virus.

A three-star center recruit coming out of Lafayette High School in 2016, Johnson went right across the road to Ole Miss to fulfill his childhood dream of being a Rebel. It took Johnson three years, until his redshirt junior season, to see much action along the offensive line at Ole Miss, but would start all 12 games at center for Ole Miss during the 2019 campaign.

Despite the team missing spring and being unable so far to practice under Lane Kiffin and the new Ole Miss coaching staff, it’s presumed that Johnson will slot in yet again along the inside of the offensive line for his redshirt senior season. Right now, he’s thinking far off about just getting back to that football season, whenever in the distant future it may be – and, he said, he’s thinking about how football may have accidentally brought him even closer to coronavirus.

Johnson had been following this outbreak much closer than others – he was supposed to be in Japan over spring break. Alongside a few others from Ole Miss, he was going to teach in a football clinic. Clearly, as coronavirus swept Asia, that did not happen.

“Obviously, this coronavirus was a much bigger problem in Asia than it was here for a long while before it was a problem here,” he said. “So, I had been monitoring the whole thing from the start, simply because it was going to affect my spring break trip to Japan. … It’s crazy. I remember following this thing as it was spreading through Asia, and then a few weeks later, it’s affecting (my) family.”

Right now, Eli is just hanging in there. His mother is already doing pretty well, but until she’s fully recovered, Eli is essentially the man of the house for his 5-year-old sister.

David is still pretty heavily medicated, Eli said. The family can’t go visit their dad, but they do check in a few times a day over phone calls. In this time, until he is cleared of the virus, it’s about all they can do.