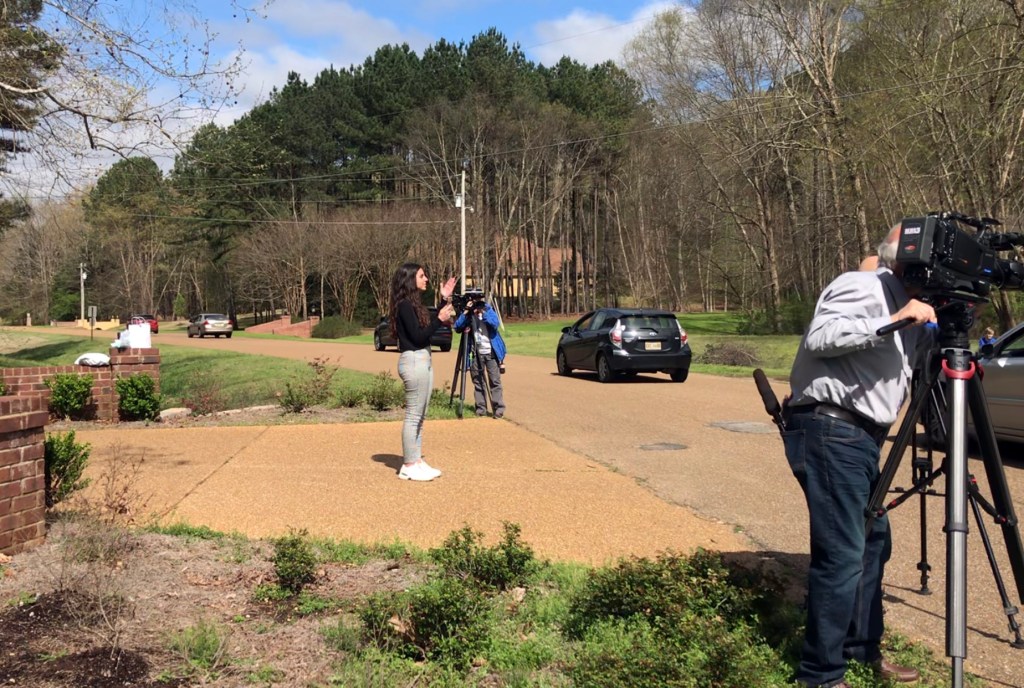 Paula Garcia-Serrano waves to friends as they drive by during a car parade to say goodbye on Wednesday, March 25, 2020. Serrano, who was an exchange student at Oxford High School, was required to return to her home country of Spain this week due to the COVID-19 pandemic. (Jake Thompson/Oxford Eagle)

When Paula Garcia-Serrano came to Oxford as part of a exchange student program, she never imagined a pandemic would cut it short.

Unfortunately, that is exactly what happened. With novel coronavirus (COVID-19) cases rising in Mississippi, and the United States, Serrano was required to return to her home country of Spain this week. The decision cut her time as an Oxford High School student short by two months.

When the news broke of Serrano leaving Oxford, teachers and friends came together to wish her a heartfelt goodbye. Due to social distancing guidelines, the goodbye was unorthodox in method as people lined up along her street and participated in a car parade.

As friends and teachers waved goodbye, Serrano stood in her driveway waving and trying to not be overcome with emotion from the gesture and surprise.

“I feel like I’ve been (in Oxford) forever,” Serrano said. “All the support that everyone has given to me and how everyone is coming together, even though it is tough. … I’m so happy, and I love this place.”

Once Oxford School District began distance learning on Monday, Serrano was alerted by an email that all the people on her scholarship would have to return to home. She, along with her host family, appealed the decision, but it was mandatory and Serrano had to go back.

OHS teacher Chelsea Winnick came up with the idea to hold the car parade for Serrano. She sent an email out to to as many people as she could think of on Tuesday, and 18 hours later, around eight vehicles lined up in the Woodland Hills subdivision to say goodbye to their friend.

According to Winnick, Serrano is someone who was involved in as many activities as possible.

“Paula has just jumped into being a part of our community here,” Winnick said. “Passionately, enthusiastically and really did everything that she could to integrate, and she’s just been such a great addition to our community. She was really heartbroken when she found out she wouldn’t be able to end the year with us.”

Serrano arrived in Oxford through a scholarship as part of the ASSE International Student Exchange Program. Not every exchange student is being required to return to their home country, according to Serrano’s host mother, Stephanie Laporte.

“We have tried to fight it, that’s for sure,” Laporte said. “Unfortunately, I think it’s inevitable.”

Once back in Spain, Serrano said she will have to stay in Madrid and potentially go into mandatory quarantine, or lockdown, before being able to return her home city of Málaga, where her family is.

Serrano headed to Dallas on Thursday, where she and the other exchange students will begin their journey back to Spain. Despite not being able to finish out her junior year in Oxford, Serrano said she intends to come back and stay with the Laportes to visit her friends again once the pandemic is over.