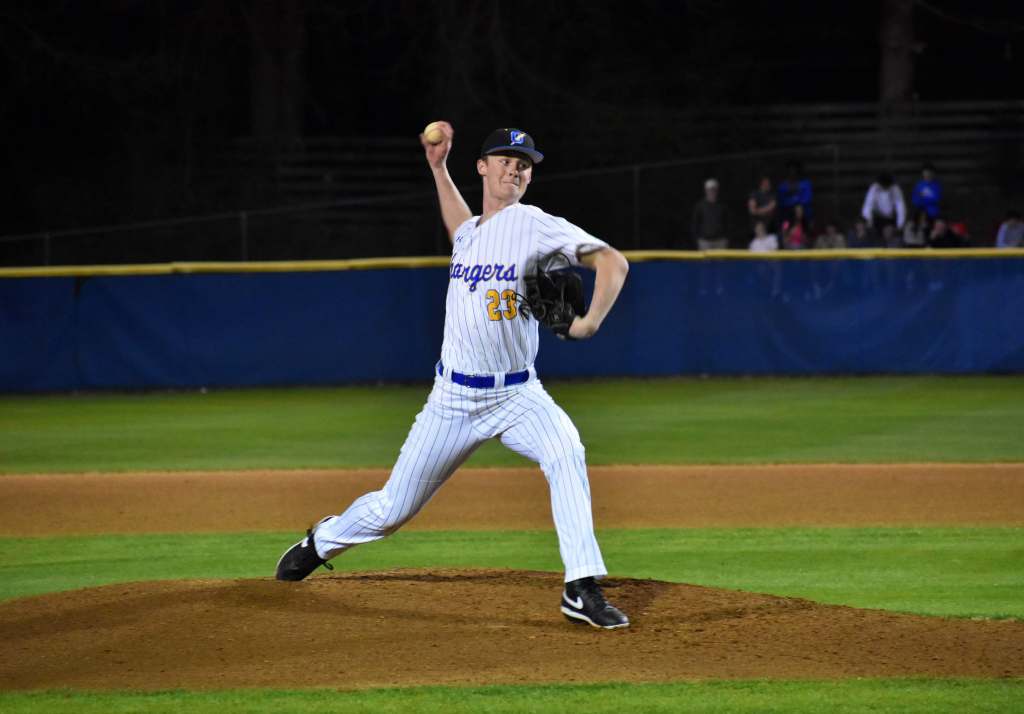 Owen Bruce sits at a 3.60 ERA to this point through his senior season for Oxford (Photo by Nathanael Gabler)

This period of uncertainty has seemingly hit high school seniors harder than anyone. Colleges will be granting an extra year of eligibility for athletes, but for high schoolers, many may have unknowingly played their final games. Over the next handful of days and weeks, the EAGLE is speaking to senior athletes about where their heads are in times where so much is unknown. Next up: the Oxford High School baseball team.

Everything spiraled for the Oxford baseball team during a single bus ride.

The Chargers haven’t played a ballgame since the Battle at the Beach, a tournament in Biloxi over spring break. It was the bus ride home from Biloxi that changed many of their senior seasons forever.

Owen Bruce, one of 11 seniors on the Oxford team, said he can’t remember who was making the coronavirus jokes on the way down South. He doesn’t really blame them, and for good reason – we were all pretty naïve about the severity of this virus two weeks ago.

“When we were going down to Biloxi, somebody was joking around saying there was a case down there,” Bruce said. “For some reason, I believed them. I was talking to my mom and I told her about it, but told her it was a joke. She said that it better be a joke, because if there was a case, she wouldn’t want me to go.”

At the time, the news was incorrect. The first Mississippi cases of COVID-19 came from Forrest County, near Hattiesburg and northwest of Biloxi. Regardless, the message stuck.

The Chargers went 1-2 in three games at the beach, coming from behind and scoring seven runs in the final inning to beat Jackson Academy 9-6 in their lone win.

What they had no idea at the time was that this might be their last win as a senior class, and soon their final bus ride home. Boarding a charter bus to return home, the coaching staff turned on the news to watch President Donald Trump address the nation about rising concerns regarding the coronavirus outbreak. Later, with the television now on ESPN, the team watched the NBA shut down the league after Rudy Gobert tested positive.

But it still never hit home.

“Honestly I didn’t even think that it would affect us. It never really crossed my mind,” senior Eli Wicker said. “I knew it was serious when you see the SEC cancel their stuff and March Madness stops. That stuff was really piling up, but it wasn’t us. For me, it was when they cancelled school that it became real.”

It was the next day where everything took off and hit closer to home for high schoolers. Sam Bianco, another Oxford senior, said he can’t really remember really what day it was – it was a Thursday – because they all flow together right now.

But he woke and vividly remembered just scrolling threw Twitter. Every refresh of the application came with more news.

“That’s when it really took off. They cancelled college baseball, and then our school was cancelled for a little while, which means we can’t play,” Bianco said. “I’m kind of losing my mind there, laying in bed, because everything just kind of was happening so fast. It was really overwhelming.”

Until that date comes, if it ever does, the team is on their own. They can’t practice, and they can’t go to the school to use the facilities. Bruce said he has been tossing balls around in the backyard with his dad and running a little bit.

“It’s not a lot, but with the city pretty much shut down, that’s all we can do,” Bruce said.

Wicker said he’s running and hitting off a tee, doing some resistance band work to keep his arm in throwing shape. Bianco has kind of just used the freedom to take some time away from baseball, he joked.

There’s nowhere really to go work out, so instead he’s been playing a lot more basketball with his older brothers Drew and Ben, who are home indefinitely and unexpectedly from college.

But what about this period isn’t unexpected? It’s certainly now how these seniors envisioned their final year.

“I couldn’t have imagined this in 100 years. If someone told me that my senior year would end in early March, I’d just laugh and tell them there’s no way that’s happening. It’s unreal. It hasn’t really set in that much, because it’s not over yet, officially,” Wicker said. “We’re staying about as optimistic as we can, but at the same time, we know that there’s a good chance that it’s over. Everyone seems to be moving in that direction, they just haven’t said the official word yet.”