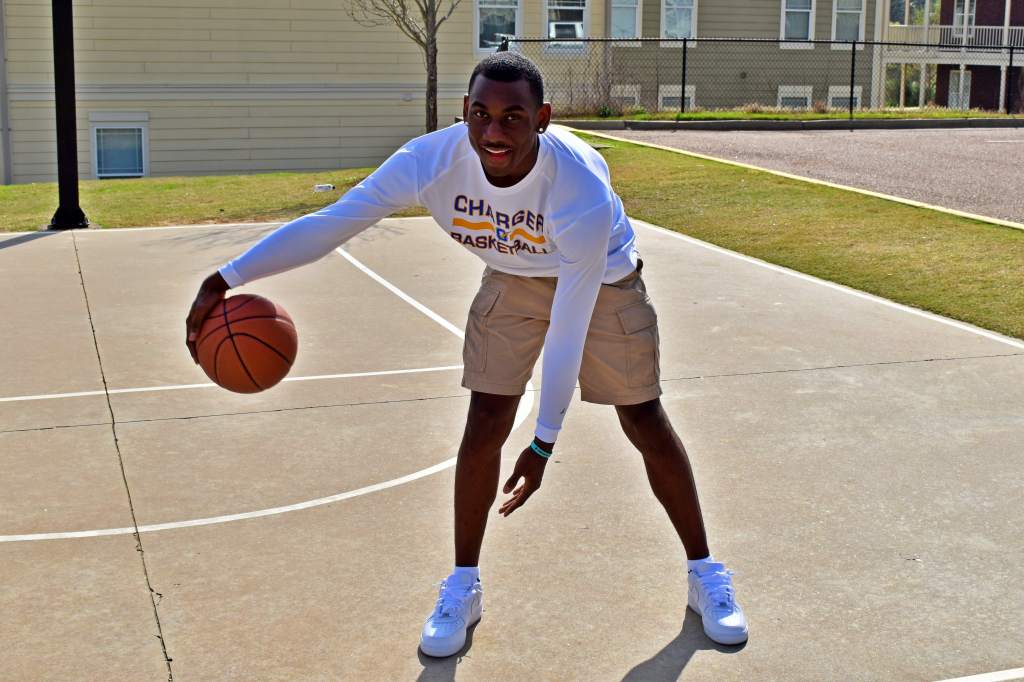 With coronavirus shutting down schools and gyms, Blackmon has resulted to getting shots up on outdoor courts (Photo by Nathanael Gabler)

Kylan Blackmon is headed to The Sunshine State.

The Oxford High School senior announced his commitment to play basketball at Jacksonville University on Sunday evening in a statement on Twitter. The decision comes following a senior year in which he averaged 22.9 points and 7.1 rebounds per game and was named the EAGLE’s All-Area Player of the Year for the second consecutive season.

“First and foremost, I would like to thank God for blessing me with the ability to play basketball. I want to thank the entire Northeast family for showing me love since the day I signed,” Blackmon’s commitment statement read. “I’ve always had a dream of playing college basketball at its highest and that’s what I’m going to do… with that being said, I will not be attending Northeast, I am headed to Jacksonville, Florida. I am committed to Jacksonville University. Go Dolphins.”

Blackmon had originally signed to play two years at Northeast Mississippi Community College back in February. However, the coaching staff at Northeast was allowing Blackmon to continue pursuing the opportunity to play Division I basketball, granting him a free release from his national letter of intent.

Jacksonville was not the only D1 school showing interest in the Oxford senior; they were just the first to come to the table. Blackmon had other visits lined up, including ones to Liberty University and Lincoln Memorial University, one of the top DII schools in the nation. However, with the NCAA suspending all recruiting trips until, at the very least, April 15, his visitations had to be cut short. That included a trip to Jacksonville as well. Now, he’s cancelled those other trips: “It’s 100-percent Jacksonville,” he said.

In the end, Blackmon said a large part of his decision came down to selecting the D1 school that gave him the most love from the start. Despite scoring 17 points per game as a junior in the 2018-19 season, and being named the MVP of the Mississippi North-South All-Star game that year, it took all the way until February 2020 for Blackmon to pick up his first Division I offer – that offer came from Jacksonville University.

“Ever since they started recruiting, they’ve been hard on me. And they want me. It feels really good to go where you’re wanted,” Blackmon said. “They took a chance on me that not many others did. They believed in me first and that sort of stuck.”

Playing in the Atlantic Sun conference, Jacksonville went 14-18 this past year, including a 7-9 record in conference. Jacksonville University, ironically, is the same school in which Ole Miss women’s head coach Yolett McPhee-McCuin coached for five seasons, leading the Dolphins to a 94-63 record (50-24 in ASUN play).

Blackmon hasn’t been able to visit Jacksonville yet due to COVID-19 restrictions. He joked that, nowadays, commitments without a visit is just the game being played. He’ll join two forwards as part of their 2020 recruiting class. Being the only guard signed, coupled with the departure of one of their starting senior guards, Blackmon expects to be able to compete for some playing time during his freshman year.