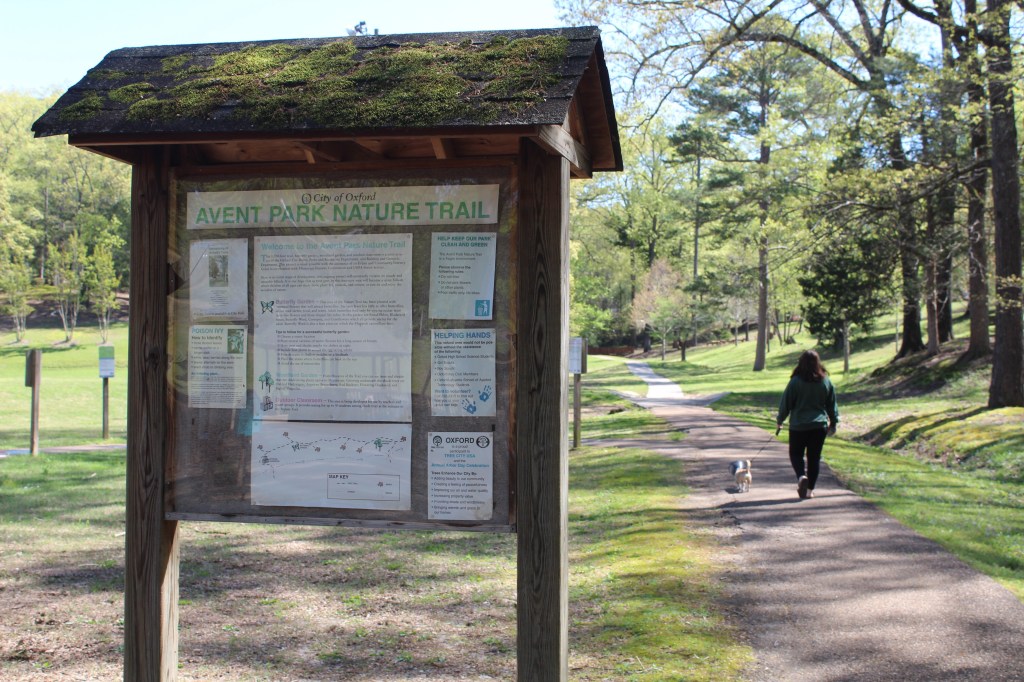 An Oxford Resident walks her dog at the nature trail at Avent Park in Oxford, Miss., on Thursday, April 2, 2020. (Photo by Davis Coen)

In light of the statewide “shelter-in-place” order made by Mississippi Governor Tate Reeves during a press briefing on Wednesday, which went into effect Friday at 5 p.m. and closed all places of amusement and recreation to the public, the State’s walking trails continue to remain open.

On the local level, Oxford’s Board of Aldermen passed their second resolution during a special meeting on March to try to slow down the spread of the new coronavirus. While community centers and parks were among the businesses and business functions deemed non-essential, the City’s walking trails were made exempt.

The Board’s “Stay at Home” resolution, which acknowledged that walking trails cater more to individual outdoor activity than gatherings in groups, was set to expire on April 6 – although it was reinforced by Reeves’ executive order, which will stay in effect until 8 a.m. on Monday, April 20, unless rescinded, modified or extended. This further allows the community to enjoy the numerous delightful trails the City has to offer during the early weeks of Spring – while still being able to practice responsible social distancing.

“Any walking trail that we’ve got in the parks is open,” said Executive Director of the Oxford Park Commission (OPC), Seth Gaines. “We’re trying to encourage less activity of gathering in the parks, to let people either stay at home, stay in place or away from other people, but also, if you’re needing an outlet – because people do get restless – get out and walk in a park.”

Gaines explained that while the walking trails are in fact open, other parts of the parks are closed completely, because they are more prone to group gatherings.

“If there are gathering spots in our parks and parking lots, we’ve got those closed off the best we can. We have closed the back parking lot of Avent Park because people were gathering there,” he said. “Yes – you can go use the walking paths, so you can walk and get out – but we don’t want to encourage gathering spots.” For this reason also, park playgrounds are off limits.

During this health crisis, when the mere act of staying home has scarcely been more crucial to the community, Gaines said the City’s various walking trails have never been a greater asset – as engaging in individual activity and recreation continues to make the shortlist of essential activities.

“It’s something people don’t do enough, but now that everything else is shut down, it sure is a nice opportunity to get out,” Gaines said.

“Things do change daily it seems. But for us, we took precautions early, and shuttered so much early,” said OPC Community Relations Director John Davis. “As for the trails, they haven’t been closed, but people that use them absolutely should be using safe social distancing.”