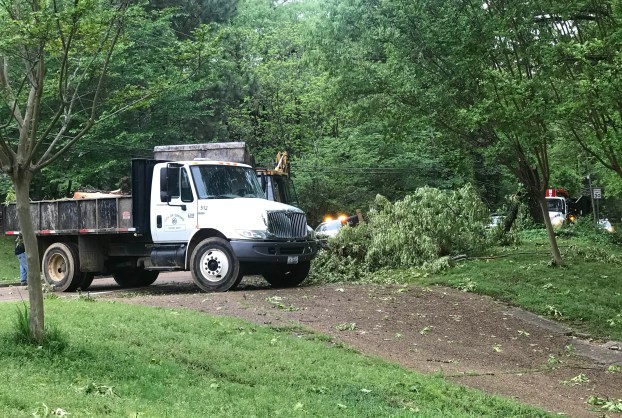 City of Oxford employees work to clear a tree that had fallen on Sisk Avenue during Sunday’s storms. (Jake Thompson | Oxford Eagle)

There were 18 counties throughout the state that reported damage, according to MEMA’s initial storm report published on Monday. Nearby Panola County reported one fatality.

Lafayette County reported five homes damaged from the high winds. Several trees were blown down around Oxford, including one in Oxford Memorial Cemetery.

“We probably had 100 to 200 trees down, scattered all over the county,”  said Lafayette County emergency management director Steve Quarles. “We’re actually in real good shape.”

Quarles said most of the county roads that were blocked due to trees were close to opening back up as of Monday afternoon, though a few still had downed power lines as of just before noon on Monday.