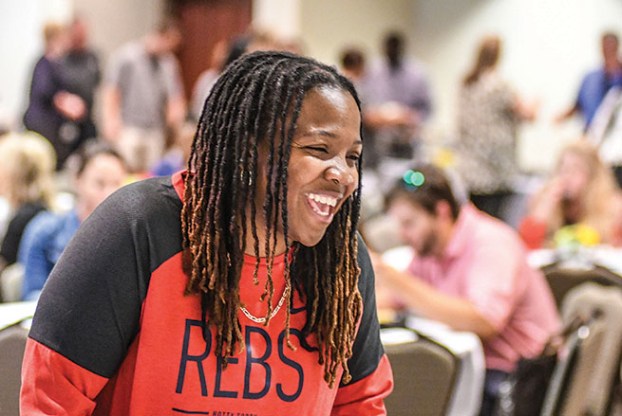 Yolett McPhee-McCuin greets those in attendance at the United Way campaign kick-off before speaking at the annual luncheon in Oxford, Miss. on Wednesday, September 25, 2019. (Bruce Newman, Oxford Eagle via AP)

With the spring signing window opening on Wednesday, Ole Miss signed a sharp-shooting junior college guard to add to the immediately eligible 2020 recruiting class, and also got a commitment from one of the top available transfers in the nation.

Signing and joining the now-No. 13 ranked recruiting class in the nation is Tiya Douglas of Trinity Valley Community College. Playing on a team that went 32-1 this past year, Douglas averaged 13.9 points per game as a freshman, shooting 40.3 percent from beyond the arc in the process.

She’ll join a recruiting class that ranks tops in the SEC and includes two five-star recruits.

“We were extremely excited to get a phone call from Tiya to say she was going to be a Rebel,” McPhee-McCuin said. “Tiya is a winner. She has won at every level, and will only get better here in our system. She is extremely skilled, has high character and embodies the work ethic that is needed to succeed in this conference. We expect Tiya to impact us immediately at the guard position this upcoming season.”

Additionally, Ole Miss picked up a commitment on Wednesday from one of the nation’s most touted transfers, Shakira Austin from Maryland.

Ranked as the No. 4 overall recruit by ESPN in the class of 2018, Austin played two seasons at Maryland, averaging 10.3 points and 8.4 rebounds over the two years. As a freshman, she broke the Maryland record for blocks in a single season with 89.

McPhee-McCuin will not be able to comment on the commitment of Shakira Austin until she becomes an official signee. Barring a one-time transfer waiver from the NCAA, she’ll have to sit out the 2020-21 season. Recently landing Shay Robinson as an assistant coach, also from Maryland, it’s safe to assume Robinson’s hand played a big role in the landing of Austin.

The Rebels failed to win a single SEC game last season, but look poised for a big bounce-back year to come, McPhee-McCuin’s third season at the helm at Ole Miss.

Kermit Davis and Co. had already landed the commitment from one of the nation’s most sought-after graduate transfers earlier this... read more